During Fall Commencement on Dec. 9, the University of West Alabama inducted U.S. Jones Elementary teacher and computer lab director, Amelia Mackey, into the prestigious association known as The Society of the Golden Key. The objective of the society, which was founded in l963, is to honor alumni and former faculty members who have brought distinction upon the institution by the quality of their lives and their achievements.

Mackey graduated from UWA in l988, and began her first job as an elementary school teacher at Sunshine School in Hale County where she endeared herself to faculty, parents and students by her unselfish dedication to students, including using her own money to help some of the disadvantaged children in the school system. 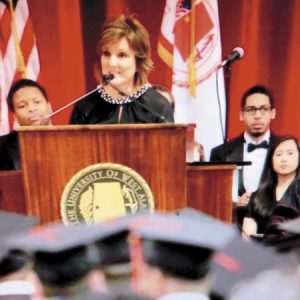 U.S. Jones Elementary teacher Amelia Mackey speaks at the University of West Alabama’s fall commencement in December upon being inducted into the Society of the Golden Key.

In l999, Mackey moved to U.S. Jones Elementary School in Demopolis and began teaching fourth grade where she continued to assist students who needed extra encouragement or help, including after school. She conceived and set up a broadcast team for the school, was awarded several grants, organized the school’s robotics program, and has developed programs that have expanded the activities of the children to the point where other schools have adopted her pilot programs.

Mackey has continued to receive grants for various programs, has served on the State Standardized Alabama Reading Math Test content and bias committee, and has been selected as Teacher of the Year, as well as selected for the Hugh Lloyd Excellence in Education Award.

In an effort to continue her life-long goal of making students feel important, she conceived and set up a BRAG Board that is shown daily in the lunchroom, which showcases the work of students, thus boosting their self-esteem and confidence.

She is presently working in the computer lab where she teaches Coding and Robotics to every student once a week in third through fifth grades and teaches Broadcasting and Journalism to a select group of fourth and fifth graders who produce a daily news program for the school.

Other inductees into the Society for 2017 were John D. Crawford of Valdosta, Georgia, James W. Brown of Montgomery, and Tim Mansour of Loganville, Georgia.

(This article originally appeared in the Saturday, January 6 issue of the Demopolis Times.)