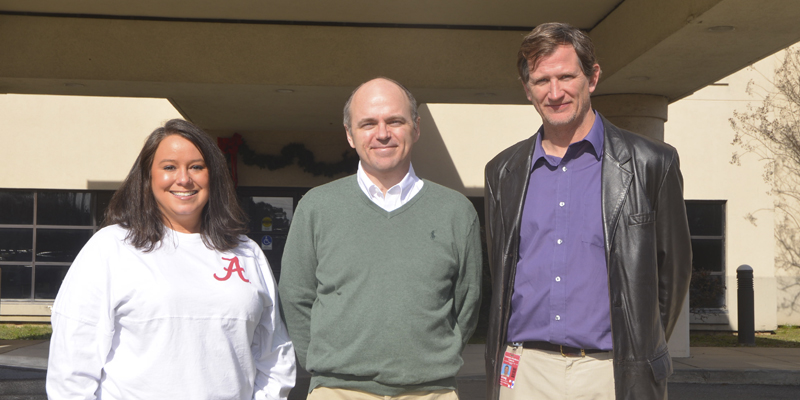 Dr. John Geyer and his staff at the Bryan W. Whitfield Memorial Hospital Sleep Disorder Center help the community sleep at night, literally. As medical director of the sleep center, Geyer evaluates patients and orders sleep studies based on their problems. Once Craig Schumacher, RPSGT, RST, performs and grades the studies, Geyer reviews the data to decide what treatment is right for his patients.

“The study is primarily to figure out what they have. And then we tailor a treatment for that,” Geyer said.

Geyer and Schumacher both have been at the sleep center since it opened 13 years ago, along with Sleep Technician Shawntral Sanders, who acts as the face of the center and has performed nearly 3,000 sleep studies.

“We offer treatment for numerous sleep disorders, and a lot of times in order to properly diagnose and recommend treatment therapy, you have to have diagnostic tools. The center itself performs those diagnostic tools,” Schumacher said.

In addition to running the sleep center in Demopolis, plus two others in Tuscaloosa and Northport, Geyer recently released the third edition of a textbook he has written and edited since 1999 called “Atlas of Polysomnography.”

The latest installment was revised to reflect the new equipment, new technology and new scoring methods that have emerged. Schumacher contributed to the third edition by finding examples of abnormalities to include in the new edition. Monica Henderson, RN, RPSGT, also assisted with information gathering.

Polysomnography, which is overnight sleep study, is an important science because of how sleep, or the lack thereof, affects people in nearly every aspect of their lives.

Patients may also be suffering from other cognitive issues, such as having trouble processing or remembering information. Also, sleep disorders that leave the patient constantly exhausted affect quality of life overall, which can lead to depression, according to Henderson.

Individuals with movement disorders may even physically harm themselves or another person due to violently moving around in their sleep. Sleep disorders are also often related to other physical ailments, such as cardiovascular diseases and diabetes. Patients usually see physical symptoms improve once their sleep begins to improve, which should be within a day or two.

“For most people, the sleep disorder is a freestanding disorder that is contributing to and associated with other things, but not necessarily caused by them,” Geyer said.

The center is open from 8 a.m. to 4 p.m., Monday through Friday. At night, the center conducts two sleep studies, during which a patient will be “all wired up,” according to Geyer, and monitored through a computer screen in a nearby room as they sleep for about seven hours.

Each study must have a physical order 1 to 3 weeks in advance. Patients who have sleep studies done range from 13 years and up. Patients can also come in based on a doctor referral or a self-referral.

(This article originally appeared in the Wednesday, January  issue of the Demopolis Times.)