Commission asked to repair or close portion of CR 33

On Jan.9, the Marengo County Commission held a meeting at the Marengo County Courthouse in Linden in which they discussed the closing of a portion of County Road 33. The road, which is about a mile east of Linden, has not been maintained in nearly 30 years. Landowners ask that the county either maintain the road or close it.

The commission tabled the issue until February’s meeting, allowing Dist. 3 Commissioner John Crawford Jr. time to reach out to other landowners and make sure they want the road closed. Attorney Woody Dinning Jr. will send each landowner a letter stating the process the commission will take to close the road. In March, he will set a time for anyone who objects to come before the council. 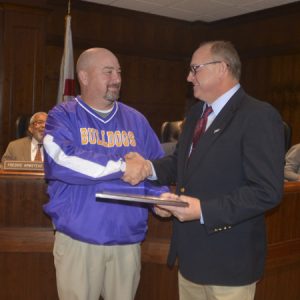 Marengo County Dist. 5 Commissioner Michael Thompson presents a plaque to Sweet Water Head Football Coach Pat Thompson recognizing his team’s 1A State Championship. The Bulldogs went 13-1 on the season, capping it off with a 20-6 win over Pickens County in the title game.

Other items discussed by the commission included:

• The commission presented the gavel to Commissioner Calvin Martin, who will serve as the commission chairman for 2018.

• The commission adopted the Severe Weather Preparedness Tax Holiday with no amendments or changes to the previous year’s. The holiday will take place Feb. 23-25, during which shoppers may purchase certain severe-weather preparedness supplies without state sales tax or use tax.

• The commission recognized Sweet Water High School with a plaque in honor of winning the 2017 1A state football championship.

• The commission accepted a proposal by Southern Paint & Insulation to paint, chalk and fix stucco at the county jail for $29,500 provided they use the right materials, provide a bid bond and notify the commission before work begins. If these terms are not met, the commission will accept the next lowest bid with the same terms.

• Pastor Major Burrell was appointed to the E911 Board to serve District 1.

• The commission entered an executive session on the basis of naming of character. No vote was taken afterward.

The next meeting is scheduled for Feb. 13. All meetings are open to the public.

(This article originally appeared in the Wednesday, January 10 issue of the Demopolis Times.)