U.S. Jones one of 24 state schools recognized by Council for Leaders 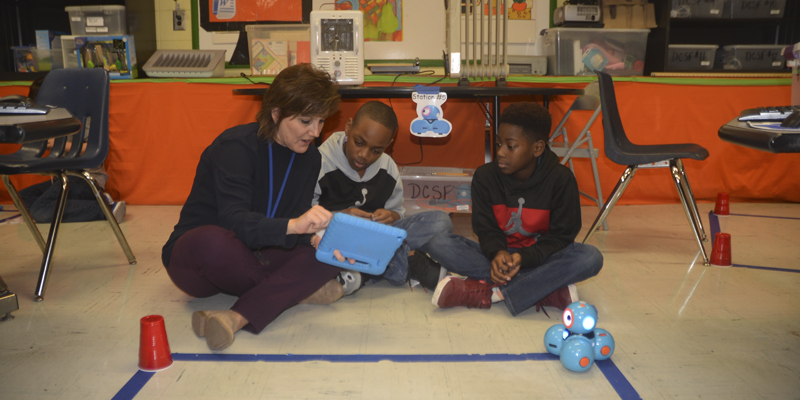 Amelia Mackey teaches the coding and robotics class at U.S. Jones Elementary School, which earned them recognition as a 2017 CLAS School of Distinction. She is helping students Caden Glenn, middle, and Kyron Bennett, right, with their coding challenge.

The Council for Leaders in Alabama Schools (CLAS) named U.S. Jones Elementary School a 2017 CLAS School of Distinction for their coding and robotics program. They were one of 24 schools distinguished out of 107 applicants.

The coding program began in 2015 as an after-school program and has since developed into part of the students’ curriculum, utilizing robots, drones and lessons from code.org and Wonder Workshop. It was introduced in an effort to prepare students for “21st Century jobs,” according to Amelia Mackey, who teaches the coding and robotics class.

She and Clark started the program because Mackey was searching for new technology to incorporate into her classes and saw the word “code” constantly pop up. She realized the need to teach students coding after further researching the field.

“The biggest thing that kept sticking out was 70 percent of jobs in STEM were in computing, but we were only graduating eight percent in that,” she said.

Mackey said that students learn problem-solving, teamwork and persistence through the class and that they focus on real world problems. For example, the fifth-graders would build a city out of blocks, and then be tasked with programming a drone to land in a certain area as if it were to deliver a package, much like Amazon.

Students also use Legos to build attachments for their robots, so they can perform specific tasks.

“I can’t tell you all the benefits our children have with this. They’re risk-takers. They’re innovators. They’re creators,” Mackey said.

She also said that, while the class is at a good place, they will continue to update the coursework and technology as needed. Clark also expressed interest in entering competitions with the coding and robotics class.

Clark and Mackey were both grateful for the financial support provided from the Demopolis City Schools Foundation for the class.

“The foundation plays a key role in this program, because if we did not have the equipment to do it we would have not received this [recognition],” Clark said.

Superintendent Kyle Kallhoff believes that the honor is based on the hard work from everyone at U.S. Jones.

“I’m extremely, extremely proud of U.S. Jones — the students, the teachers, Mr. Clark — for receiving this award. The nomination is based on what they’re doing with coding and STEM careers and, as superintendent, it’s always nice to have one of your schools recognized at a statewide level,” he said.

(This article originally appeared in the Saturday, January 13 issue of the Demopolis Times.)