A longtime employee at Bryan W. Whitfield Memoria Hospital was killed this past weekend as the result of a car crash in Sumter County.

George Hale Jr. was killed early Sunday morning when the vehicle he was driving apparently went off the road in a sharp curve, hitting a tree. While the Livingston Police Department did not have a completed report available nor commented on the incident, multiple sources said Hale was ejected from the vehicle. 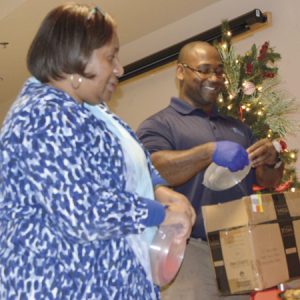 George Hale was known at BWWMH for his infectious smile. He is pictured here with employee Tashema Gilbert setting up for this past year’s employee Christmas party at the hospital.

According to hospital officials, Hale was an employee with Valley, Inc., a company contracted by the hospital to provide dietary services. He had worked at the hospital since 2007.

“(Hale) was a super individual and was part of our hospital family,” said BWWMH Administrator Art Evans. “He was an extremely hard worker and had a great smile and demeanor. He was the type of person who never met a stranger and one of the biggest Auburn fans I’ve known. Everyone at the hospital knew him. He will be missed.”

Hale was a resident of Livingston. He was married to Melissa Hale and had three children: Tyler, 17; Alyssa, 12; and Alexis, 10. He is also survived by his parents, George Sr. and Jerry Hale, and a sister, Sherita.

Funeral arrangements are being handled by Larkin and Scott. There will be a public viewing on Friday, Jan. 19, from 1 to 5 p.m at the funeral home in Demopolis. A funeral service will be held Saturday, Jan. 20, 11 a.m., at Bethel Pine Baptist Church in Coatopa. Repast and burial will follow at Shady Grove Baptist Church in Livingston.

(This article originally appeared in the Wednesday, January 17 issue of the Demopolis Times.)