Ellen Steen Cook is a Demopolis-native living in Mobile who recently honored her hometown at the Etruscans Mystic Society’s annual Mardi Gras ball. With the help of Demopolis artist Kirk Brooker, her 16-foot Mardi Gras train honored the city’s history and iconic sites.

Having served on the board for eight years, she was president in 2017 and thus named Queen. Because appointments are based on a rotation each year, Cook had plenty of time to prepare her train. 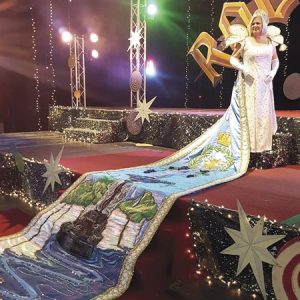 Cook described the journey from idea to garment as a three-phrase process. It began two years prior to her being named Queen with brainstorming sessions and inspiration from conversations with her mother, Adele Steen, about Demopolis.

Having been born and raised in the city, she felt more of a connection to Demopolis than anywhere else, and she wanted to celebrate it. And, since there were no guidelines for trains, she had free reign.

“It can really be anything of your choosing and I thought, ‘Well, I’ve always liked the fountain in the park. It’s pretty,’” Cook said.

At the start of 2017, she got in touch with Kirk Brooker, who sat with her on her mother’s porch one day and began sketching.

Brooker took it on because he thought it was a cool project. And with 2017 marking Demopolis’ bicentennial, it was perfect timing.

They discussed icons of Demopolis — like White Bluff and the fountain in the town square — and Brooker started sketching. Once the design was finalized, he broke the train down into digital format to turn it into a pattern for the seamsters.

Once the seamsters returned it, Brooker painted over it. The seamsters, who have sewn Mardi Gras trains for years, were skeptical of painting the satin garment. 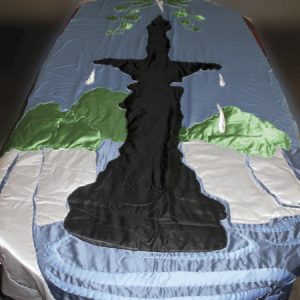 Demopolis artist Kirk Brooker sent patterns featured in the train to seamsters who then returned them to him for painting and later sewn onto the train. Brooker said it may be the first painted train featured during Mardi Gras. In this photo, the train awaits the painted downtown fountain piece.

However, Brooker, who has experience doing just that for the Canebrake Players, wasn’t worried at all. He painted it and sent it back for rhinestones to be added. The seamsters were in awe of the painted garment — it being the first one they’ve ever seen.

“They think this might be the first painted train in all of Mobile Mardi Gras history,” Brooker said.

Brooker said he didn’t face any unique challenges, but the length was something he had to work around. The 16 feet of fabric required him to paint small portions at a time, let them dry and then move on.

When it was finally time to wear it at the ball, Cook received a “heartwarming” response to her tribute to her beloved hometown. Several Demopolis natives were there, and Cook said they were “tickled” when they saw the train.

Even other organizations who have never been to Demopolis and have seen countless other trains from other Queens over the years were impressed with the design and Brooker’s handiwork.

“They already said next year they wanted one of their queens to do a painted train,” Cook said.

Brooker refused to look at any in-progress photos, so seeing the finished garment at the ball in January was his first time laying eyes on it since he finished painting it in September.

“It was absolutely awesome,” Brooker said.

The design features White Bluff and the town square’s fountain in the center with water spraying upwards forming into Cook’s collar. There is also a crown and a bee that represent Napoleon Bonaparte, whom the French founders of Demopolis supported. The grapes and olives also represent the city’s first settlers.

“I almost wanted to put a little fishing boat in there,” Cook laughed as she reminisced about her and her father’s, Fred Steen’s, love for fishing on the river in Demopolis.

There is also a gold “1817” on the train to honor Demopolis’ recent bicentennial.

Brooker said he had no problem coming up with the symbols and the design.

“I lived here my whole life and have been working with the Marengo County Historical Society for 17 years now. It was fairly natural,” Brooker said.

In addition to the train, Brooker made three panel boards: one to explain each element of the train, another to share the history of Demopolis and a third to display photographs of some historic sites in Demopolis.

Because she loved the train so much, and it honored Demopolis, Cook and Brooker worked out a deal to have it displayed in Demopolis from time to time. Cook said she didn’t want to just keep it in storage and that she wanted others to enjoy it as well.

“It’s a little bit of a legacy maybe,” Cook said.

Cook’s train is on permanent loan to the Marengo County Historical Society, and its first showcase will be at the Mardi Gras Masquerade Ball on Feb. 9 at Lyon Hall from 7-11 p.m., which Cook plans to attend.

(This article originally appeared in the Wednesday, January 24 issue of the Demopolis Times.)