Scott will receive the scholarship award at the induction ceremony and banquet on Monday, Feb. 12, at the Demopolis Civic Center. 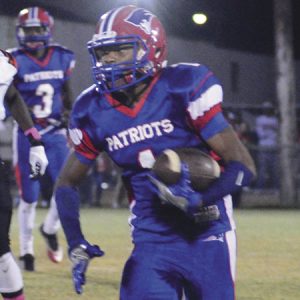 Scott, who is a star in basketball, football and track at LHS, maintains a grade point average of 3.2 while participating in all these sports, and was the captain of the 2017 Patriot football team.

Scott played in the AHSAA 2017 North v. South Basketball Game, was the West Alabama Watchman Player of the Week, received the Linden football team’s Highest GPA Award for three years and was selected as outstanding player on a number of occasions.

Scott is also very active in other school activities as well as a community volunteer.

The annual MCSHOF ceremony and meal will be at the Demopolis Civic Center with gathering time between 5 and 6 p.m. and the program beginning promptly at 6 p.m. There will be recognition of the 46 previous inductees who have brought fame and honor to the county through their civic endeavors as well as athletic skills ranging from football, baseball, basketball, softball, boxing, wrestling, tennis, track and umpiring. There will be a keepsake program given to each attendee.

Ticket to the banquet are $25 and may be purchased from Tom Boggs, Tony Speegle, First Bank of Linden, the Westside Branch of Robertson Bank, the Demopolis Branch of Sweet Water State Bank, or from any board member.

(This article originally appeared in the Wednesday, January 31 issue of the Demopolis Times.)