According to hospital officials, Evans will retire June 30 and a search will be conducted for a new CEO, spearheaded by UAB Health Systems with assistance from the Tombigbee Healthcare Authority Board.

Evans, who was first hired to the BWWMH staff in 1979 as a controller, said he felt this is the perfect time for him to step down.

“The decision is the culmination of a number of things. I feel very good about where we stand in our partnership with UAB. We are moving in a positive direction and feel there are only good things to come,” Evans said. 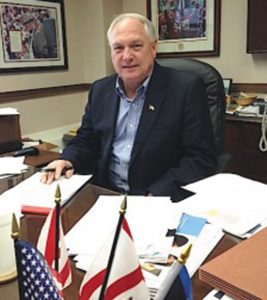 He added that, at 67, he looks forward to spending more time with his wife, Kaye Evans, and six grandchildren.

“When I look back at the past 39 years, I feel very blessed. There have been so many wonderful people and moments,” he said.

Evans continued in his role as a controller at the hospital until 1996 when then-CEO/Administrator Charles Neighbors promoted him to CFO/Assistant Administrator. In October 2014, Evans was named the interim CEO/Administrator and the following January was officially named to that position.

He informed hospital staff of his retirement on Tuesday.

“Art has done a fantastic job in a very difficult setting, that being rural healthcare. He was very instrumental in bringing UAB to Demopolis and creating the relationship we currently have with them,” said Rob Fleming, chairman of the Tombigbee Healthcare Authority Board. “He’s been with us a long time and has been very dedicated to the wellbeing of the hospital and he will continue to be dedicated to it. The board certainly appreciates all he has done over the years.”

“Running any hospital in Alabama, but particularly a rural one is very, very difficult these days. Art has not only done an excellent job in keeping Bryan Whitfield going, he was instrumental in finalizing the relationship with UAB and has been a great partner in getting the UAB relationship off the ground in a positive way. The hospital and the community should definitely appreciate Art for all he has done,” said Don Lilly, a UAB vice-president who also serves on the THA Board.

While Evans said he looks forward to retirement, he will miss building relationships with those in the medical community.

“As I reflect on my career, I quickly realize how blessed I’ve been to be associated with so many great individuals that have had such a significant impact on the healthcare delivery system in our community,” he said. “From the past I think of doctors Holifield, Perret, Ketchum, Whitfield, Brasfield, Luther, Saelens, Ratliff, Rembert, and Nabors. Currently there are doctors Fitzgerald, Curtis, Travis, Roberts, Chu, Kahler, and, of course, all the employees at the hospital who are dedicated and loyal to the community we serve. I’m also happy to have worked with Dr. Ferniany and Don Lilly as we set the foundation for a bright future at Bryan Whitfield.”

Evans jokes that he wishes he could have worked at BWWMH longer … on the front end.

“I applied at the hospital, but they didn’t have an opening. It was five years later that I got a job offer,” he said.

While facing the many challenges in rural healthcare over the years, Evans said he would not be retiring if he didn’t feel comfortable about BWWMH’s future.

“I’m happy with where I’m going at this point in life and I’m seeing traction each day as we work to get our hospital where we want it to be. We have the opportunity to become a healthcare hub for other communities across the area. The future is bright at Bryan Whitfield and that made my decision (to retire) a lot easier,” Evans said.

Evans said he would work his remaining five months to move the transition with UABHS forward as well as other projects that he “feels passionate about.”

He will also continue to be active with the Babe Ruth/Cal Ripken youth baseball leagues as the District 10 commissioner. “I love being associated with the league and plan to do that as long as I can,” he said.

(This article originally appeared in the Wednesday, Feb. 7, print edition of the Demopolis Times.)