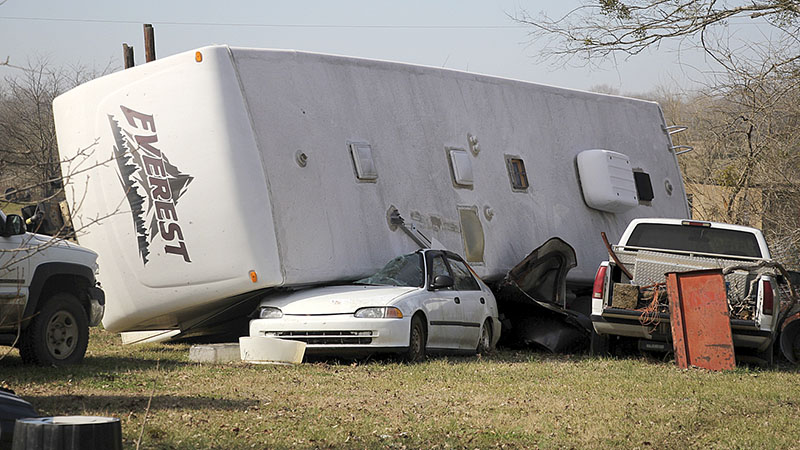 Several structures and other property along Hwy. 69 in Marengo County were damaged during an early-morning storm Wednesday, Feb. 7.

The NWS has confirmed a total of six tornadoes that accompanied an early morning storm system that made its way across the state Wednesday. 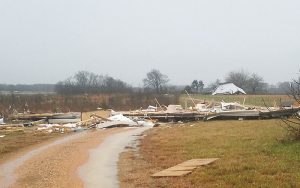 A mobile home belonging to Norman and Angela Lewis was completely lost during Wednesday’s tornado. The home is located off Hwy. 69. No one was at home at the time the storm moved through the area.

According to Marengo County Emergency Management Director Kevin McKinney, the tornado that moved through Gallion damaged two mobile homes and an RV camper.  McKinney said the two mobile homes were primarily used as temporary residences. No injuries were reported.

The tornado that struck Gallion is considered the strongest of those that touched down in Alabama with peak winds of about 100 mph and was on ground for 14 minutes, traveling 11.5 miles, McKinney said. It passed through the area at about 5:44 a.m.

The NWS has graded it as an EF-1, as it touched down north of Old Spring Hill and lifted just north of Faunsdale.

“It moved through about a quarter to six. There were high winds and a lot of lightning. You could feel the walls moving and the tin coming off,” said James Crawford whose large shop building was completely demolished at his home on Hwy. 69.

A large tree also fell on camper, while a large RV camper was toppled on top of another vehicle.

Also in the area, Norman and  Angela Lewis lost their mobile home, where they stay when traveling from a residence in Florida.

On Thursday, volunteers were in the area helping residents with clean-up. Crawford said he was grateful for the help.

“(Many of the volunteers) are from the Mennonite community. They brought out equipment and have done a lot of work in a very short amount of time,” he said. 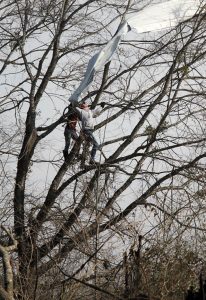 Volunteers helping with clean-up pull a large sheet of tin from the branches of a tree where it was blown during Wednesday’s storm.

The second tornado in Marengo County touched down in Nicholsville,  south of Sweet Water and has been graded an EF-0 and was on the ground for about 2 miles, according to McKinney.

A tornado was also confirmed in Sumter County, in the area of Siloam Road, according to the NWS.

That twister is recorded as an EF-0 with winds up to 80 mph., touching down at about 5:11 a.m. and on the ground for about 3 minutes, traveling just short of 2 miles. The Sumter tornado was about 150 yards wide at its peak.

The tornado damaged several houses and a convenience store.

Other confirmed tornadoes across the state as of Friday occurred in Autauga, Bibb and Chilton counties.

(This article originally appeared in the Saturday, Feb. 10, print edition of the Demopolis Times.)