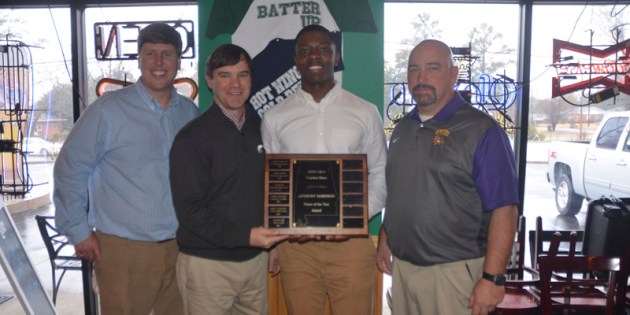 Shamar Lewis, who was named the ESPN 104.9 Player of the Year, signed a scholarship this week to play football at the University of West Alabama. Lewis was a standout of this year’s Sweet Water state championship team. Pictured are, from left, Jason Windham of Batter-Up Restaurant, Rob Pearson of 104.9, Lewis, and SWHS Head Coach Pat Thompson. 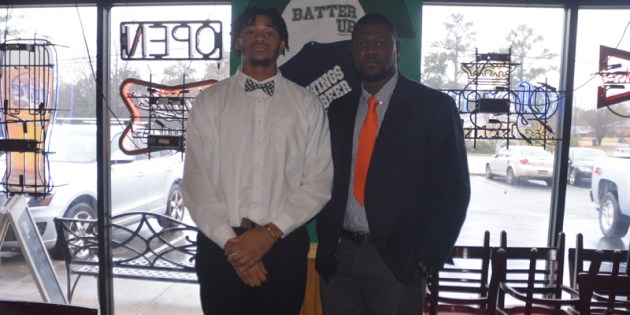 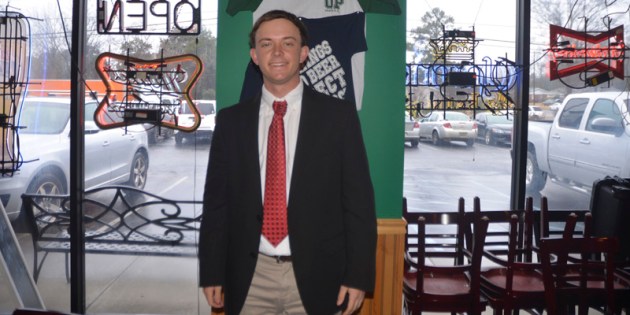 Hutson Breckenridge signed a golf scholarship with University of Mobile. 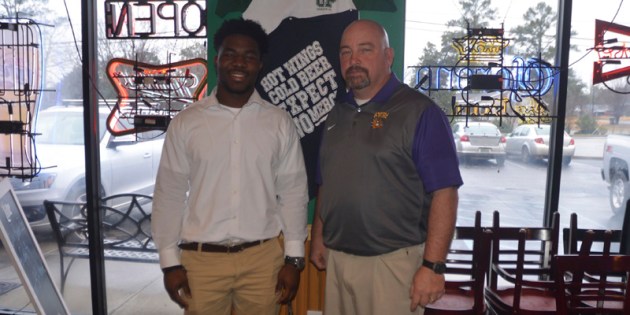 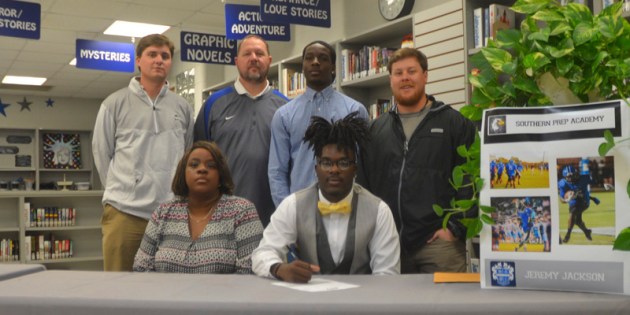 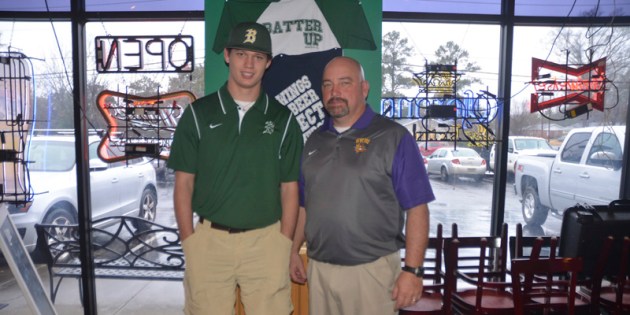 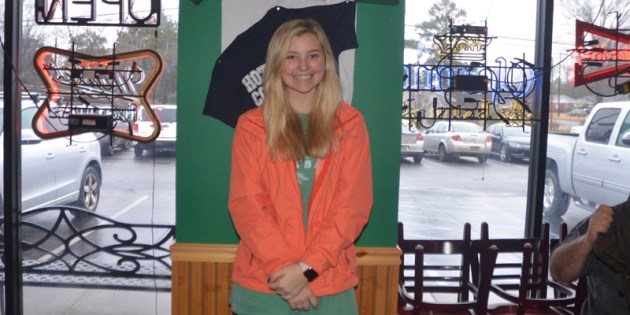 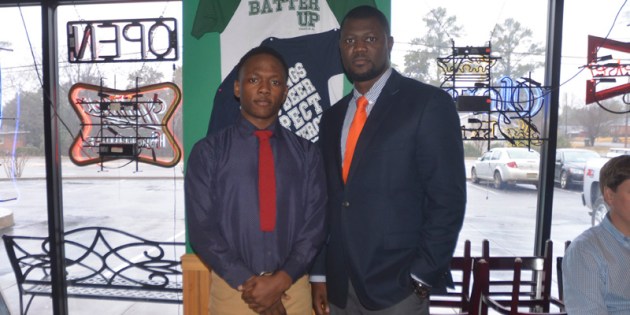 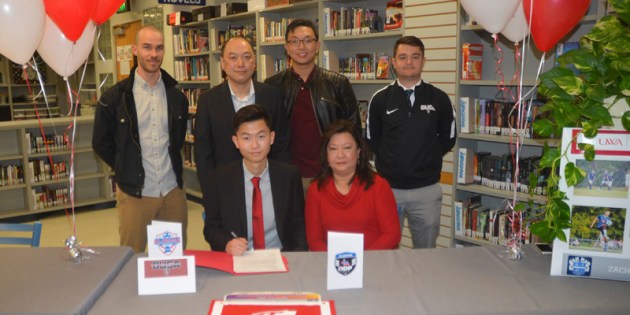 Ten students from Marengo County have signed their National Letters of Intent. The student-athletes were honored on Feb. 7 at Batter Up Sports Bar & Grill as part of the ESPN 104.9 Coaches Show. Each had their moment in the spotlight while being interviewed on the air about their choice of school and their sports career so far.

At Demopolis High School, three students are moving forward to college teams as Jeremy Jackson heads to Southern Prep Academy and Zachary Chu and Kendall Hannah both move on to the University of West Alabama. Julia Singleton signed a soccer scholarship to Judson College Monday.

Jackson played football as wide receiver for the DHS Tigers and will continue that position at Southern Prep.

Jackson hopes to improve himself and his playing skills during his time at the college.

“I wanted to go there so I could better myself and focus more on football and get another year under my belt so I can fare better,” he said.

Jackson will also focus on his academics while at Southern Prep. He will be studying Sports Management.

Jackson said that he “feels great” about his choice in school.

“I feel that it will really help me with a lot of things on and off the field,” he said.

He also said he was thankful to receive a scholarship.

Head Coach Brian Seymore said that Jackson was a “high-character kid” who “played a huge role in our success for the offense.”

Jackson is the son of Jacqueline Besteder.

As a long-time member of DHS’s softball team, Hannah is excited continue playing the sport she loves at UWA.

While her positon has not been decided yet, Hannah played as shortstop and occasionally pitcher on DHS’s team.

Hannah, who has been playing softball since her tee ball years, said that her dad was her biggest supporter throughout her softball career.

“He’s always been there helping me through my whole softball career, and he was always the one to push me to always do better and just do what I love,” she said.

Hannah, a self-proclaimed “homebody”, chose UWA because the “campus was very homey.”

Hannah’s interest in the school was piqued when she visited a softball camp at UWA, and her official visit to the campus only strengthened that. After emailing the coach, her decision was clear.

“It’s just felt like the place for me,” she said.

She is the daughter of Chad and Megan Hannah.

Chu also signed to UWA. The soccer player will continue his position as forward when he begins playing on UWA’s team.

“After meeting with the coaching staff at UWA and visiting the campus, it just felt like home,” he said.

Chu said he was thankful for the support he’s received from his family throughout his nine years of playing soccer.

He that said his mother “was always supportive” of his soccer career and that his brother also taught him a lot about soccer growing up.

Chu also said that his father “would come to as many games as he could and, even after a hard day of work, he’d take me out to the field and continue to coach me.”

Jon Kresena, Chu’s coach with Birmingham United Soccer Association, believes that Chu will go far with his work ethic and desire to better himself.

“I know that he will do great things while at West Alabama and wish him the best for his future soccer and school career.”

He is the son of Ronnie and Lucy Chu.

Smith signed to the University of Alabama at Birmingham’s baseball team, where he will play as pitcher.

Smith was pitcher for the Sweetwater’s baseball team, as well as shortstop.

“The school fits me, especially with the coaches. I really like them,” he said.

He is currently deciding between nursing and electrical engineering as a career path.

To Smith, it was a “big relief” when he signed with UAB back in December. It allowed him to finally relax knowing what his next step was.

“I can focus on graduating high school, and it’s just a relief for me,” he said.

Smith boasts 123 strikeouts over 88 innings. He was also the Class 1A Championship MVP, West Alabama Watchman Player of the Year, ASWA Class 1A Pitcher of the Years and ASWA Super 10.

Head Coach Pat Thompson said that Smith has been a “great leader for us for the past two years.”

Smith is the son of Mark and Shannon Smith.

Lewis was the running back and middle linebacker for the Sweetwater Bulldogs.

He signed with UWA as an all-around athlete on the football team.

“I’ll probably play on both sides of the ball,” he said.

Lewis said that he chose UWA because “it was a nice campus, and I got along well with the coaches. I just like the vibe of it”

He plans to major in athletic training or in engineering technology once his time at UWA begins.

Lewis also said that he wanted to “thank God for giving me this opportunity to move on and play the game that I love.”

Coach Thompson called Lewis a “great athlete and an even better leader.”

Lewis, who ran 1,205 yards, scored 12 touchdowns on 129 carries, was a member of the ASWA First Team All-State and was named ASWA Class 1A Back of the Year, Super 7 Class 1A MVP and West Alabama Watchman Player of the Year.

He was also honored as the Anthony Robinson Player of the Year.

“I just want to thank God for giving me the opportunity to receives this award and to my mother for pushing me to be the best I can be,” he said about his award.

Lewis is the son of Shameeka Lewis and Michael James.

Williamson will be attending Miles College, where he will play as running back on the football team—the same position he played in high school.

Williamson chose Miles College because of its size and atmosphere.

“It’s not really big,” he said, later adding, “It feels like home basically.”

He will study Mechanical Engineering at Miles College.

For Williamson, signing to UM meant more than a scholarship.

“I feel blessed. It’s basically a second chance to keep moving on with my dreams.”

Williamson described how he didn’t want to continue with football at one point in his career, but changed his mind after Coach Thompson told him that he could get a scholarship to college if he played well enough.

Williamson, who dreams of providing for his family, making history and overall being a good role model for others, decided to keep working hard and fell in love with the sport anew.

Thompson said that Williamson is a “gifted athlete with a great deal of potential.”

Williamson is the son of Sharon Johnson and Tobias Ward.

Hutson Breckenridge is a Marengo Academy senior who signed on to the golf team at the University of Mobile in December.

Breckenridge had a unique advantage in his golf career by being able to compete as an individual, as Marengo Academy has no dedicated golf team.

But, that also came with its own challenges, as he had to work with two coaches—Greg Ryan, DHS golf coach, during the week and Steve Whidden, Head Golf Pro at NorthRiver Yacht Club in Tuscaloosa on the weekends—in order to keep his skills sharp.

Whidden said that “It is a privilege to spend time with such a fine young man as Hutson.  The skies the limit on his future in golf and in life.”

Breckenridge said he “feels the most at home” at UM and that he fell in love with the campus.

Breckenridge thanks “all the many people that’s been in my corner.”

He is the son of Dennis and Cindy Breckenridge.

De’Angelos Crispin and Quindaris Ausbon, both football players from Marengo High School, also took the next step on Feb. 7.

Crispin is a linebacker for Marengo High School, will continue his position at Jefferson Prep.

Crispin said he felt it was a “good fit for me” and that he plans to study welding.

He played football for three years, and said it “feels great” having signed to a team.

Crispin said he wanted to thank “my mom and my coaches.”

E.B. Myrthil, the head football coach at Marengo, stepped in for the humble Crispin, who he described as “not that rah-rah talk kind of guy”.

“He doesn’t say too much but his play on the field is big,” Myrthil said, later adding, “He’s going to be a gem for Coach Carswell over at Jefferson Prep. I’m excited for him. I’m excited about what his future will bring.”

He is the son of Glenda Little and James Crispin.

Ausbon said that Lawson State would give him a “better opportunity to see stuff and get better experience.”

Ausbon plans on studying industrial maintenance during his time at Lawson State.

He is thankful for the support from his parents and the rest of his family, as well as his close friends on the football team.

“I think of them as brothers. I’m going to miss playing with them,” he said.

Ausbon is a member of the ASWA First Team All-State and had over 1,068 rushing yards this season, of which he is rightfully proud.

“Anybody would dream of that. You’ve got to work hard,” he said.

“For him to have the numbers that he did as first-year starter as quarterback to lead us to the third-round of the play-offs—we haven’t been that far since 1996—I think that he did a tremendous job,” he said.

Ausbon is the son of Joyce Ausbon and Ronald Bouler.

(This article originally appeared in the Saturday, February 10 issue of the Demopolis Times.)