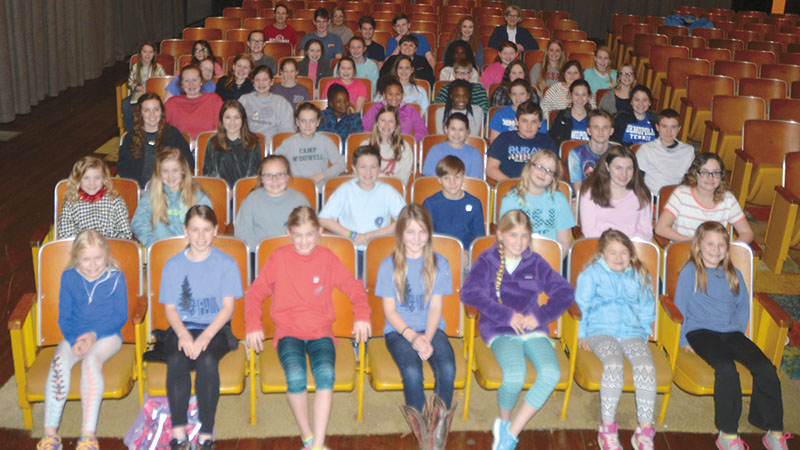 The cast and crew of the Canebrake Players’ production of Disney’s “Alice in Wonderland Jr.” The curtain opens on Thursday, Feb. 15, with additional shows on Friday, Saturday, and a Sunday matinee.

A cast of over 70 local children will take to the stage this week for the Canebrake Players’ musical production of Disney’s “Alice in Wonderland Jr.”

Directed by Jennifer Roeman, the curtain will open for the initial performance on Thursday, Feb. 15, 7 p.m., at the Old School Theatre on Main Avenue. Performances will be held at the same time and place on Friday, Feb. 16, and Saturday, Feb. 17. The production will conclude with a matinee on Sunday, Feb. 18, at 2 p.m.

The Canebrake Players called for auditions in December and since that time a group of 71 students, ages 10-18, along with two younger children, have been working to bring the classic story of “Alice in Wonderland” to the Canebrake stage.

“This is the traditional Disney-licensed version of ‘Alice in Wonderland.’ It’s been shortened for children in this age range, but it is going to be a great show for families and those who enjoy theater,” Roeman said.

While practices have been a challenge with holidays and participants struck by the flu, the director said she is encouraged by the students’ work and dedication to the production.

“They have done a great job,” she said. “We have yet to have a full cast for any one rehearsal, but they have all been working very hard to maintain their school work while preparing to put on a great show.”

The entire process — from auditions to the final full week of rehearsals — has Roeman feeling very good about the future of community theater in Demopolis.

“We had a lot of children come out for the auditions and we have so many talented, beautiful voices … it really makes me feel that we truly have a thriving theater community and that is so exciting,” she said.

Among the challenges for “Alice in Wonderland” had to do with scenes where the lead character shrinks and grows. It was the wealth of talent that helped solve that problem.

“We have three girls of different ages playing Alice, which helps to capture those different sizes,” Roeman said.

There will also be three actors playing the Cheshire cat, which is the character that serves as narrator of the musical.

Along with Roeman serving as the director, other adults in leadership roles include Tim Hall, music director; Susanna Naisbett, choreographer; and Kirk Brooker, set designer. The director adds that many parents have been very helpful volunteering for a variety of jobs.

Roeman said for those who have taken part in past Canebrake Players’ productions, working with students has been a great experience.

“This has been a great group to work with and have done a fabulous job. It’s been fun working with so many students,” she said.

Among those involved are two high school seniors, Christopher Haven and Tristan Mullen, who have participated in a number of student productions over the years. As seniors, this marks their final production as students. Haven is a crew member in lighting while Mullen plays the role of the Mad Hatter.

Tickets will go on sale one hour prior to the show and are $12 for adults and $8 for students.

(This article originally published in the Feb. 14 print edition of the Demopolis Times.)