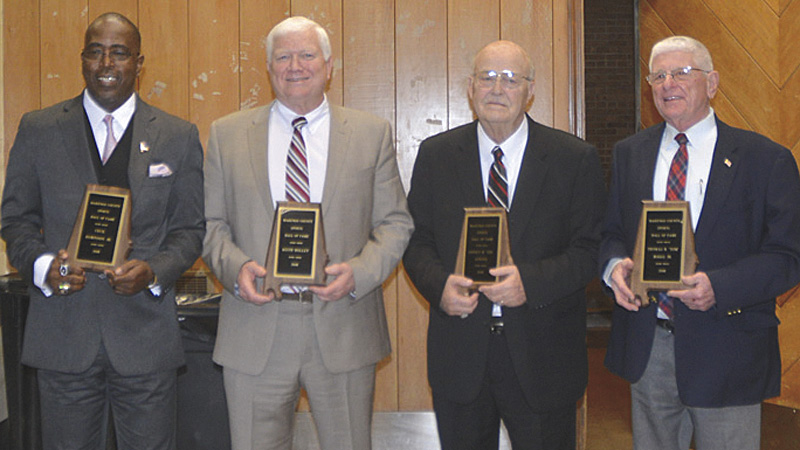 Sid Atkins, Tom Boggs, Keith Holley and Cecil Robinson were honored at the Tenth Annual Marengo County Sports Hall of Fame Banquet and Induction Ceremony as the latest additions to the hall of fame on Feb. 12 at the Demopolis Civic Center.

Mayor John Laney officially kicked off the event and welcomed everyone with a short speech. He said that the banquet was among his favorite events to attend as he gets to learn about people from the county.

“And what you’ll find out is that we’ve got some pretty special people down here in Marengo County,” he said.

Sid Atkins was the first inductee honored at the banquet. He was presented by his brother, Nolan Atkins, who spoke about his brother’s coaching career and sports achievements.

During Atkins’ acceptance speech, he talked about growing up watching his brothers play sports in school and wanting to be a coach.

“When I got old enough to play ball,” he said, “I was an excited little kid,” he said.

Atkins attended the University of Southern Mississippi on a football scholarship, and his position was changed from fullback to quarterback. His baseball team at Demopolis Academy were AISA Class A State Championships in 1995, 1997 and 1998. In 1998, Atkins was named Coach of the Year in baseball by the Tuscaloosa News.

Keith Holley was the next person inducted into the MCSHOF. He was presented by David Williams, whom Holley used to coach. Williams said Holley “molded our lives as players and also men.”

“He took a took a group of ragtag boys with a desire to play football and developed us into a two-time state championship football team — a feat that had never been accomplished at our school,” Williams said.

Holley played football, baseball and basketball while in high school. During his senior year at Marengo Academy, he was named MVP of the district basketball tournament. He played football during his college years at Mississippi State University.

Following Holley, Cecil Robinson was inducted into the MCSHOF. He was presented by his brother-in-law William Bryant.

When Robinson took the stage, he gave a special “thank you” to Doug Whitman at Linden High School, who Robinson said taught him how to coach.

“He taught me how to break down film and what to look for,” he said.

Robinson also said that Mose Jones at A.L. Johnson High School made an impact on his coaching career.

Robinson played football as cornerback and safety at Miles College for four years. In 1984, he was named to the Southern Intercollegiate Athletic Conference Second Team. Cecil was inducted into the Miles College Sports Hall of Fame in 2015. He has been coaching and refereeing since 2008.

The final inductee of the night was Tom Boggs, who co-founded the MCSHOF and served as chairman for its tenth year. Boggs was supposed to have been presented by his oldest son, but he could not make the event.

Boggs spoke about his time in the military and his relationship with his fellow inductees. He was also especially proud of the work he and the rest of the board members have done with the MCSHOF.

“I feel that my initial vision for this hall of fame and what we’ve done for the last ten years counts for something,” he said.

Boggs organized and coached the first track team at Linden as a senior. While in the army, he played catcher for an army fast pitch softball team. During law school, Boggs played on a championship Alabama intramural football team. The Demopolis Key Club honored him as the 1966 Citizen of the Year for his time spent volunteering with athletics and youth.

This year marks Boggs retirement as chairman of the MCSHOF. Tony Speegle, who also co-founded the hall of fame along with Johnny Brooker, will replace Boggs as chairman.

Isaiah Scott from Linden High School received a scholarship from the hall of fame for his athletic ability and academic record.

(This article originally published in the Wednesday, Feb. 14, print edition of the Demopolis Times.)