Depending upon one another key to 47 loving years together

Bert and Mary Louise Rosenbush were married 47 years ago on June 7, 1971, after dating each other for several months. They met in the fall of 1970 on a blind date orchestrated by one of Mary Louise’s friends.

They’ve spent the last five decades traveling the world and supporting each other. The couple has no children and believe that they make each other’s lives complete.

Mary Louise also said that they consult each other on everything, and they listen to what the other person wants. She emphasized that everything they do, they do together, such as when the couple donated the building that houses the Marengo County History and Archives Museum. 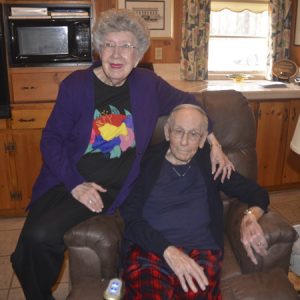 Bert and Mary Louise Rosenbush will celebrating 48 years of marriage this coming June.

“We make our decisions together.  Sometimes I have to give, and sometimes he has to give. It’s a two-way street,” she said.

Though the couple are interfaith, Bert and Mary Louise said that it has had no impact on their relationship.

“I respect the Christian religion, but I believe in the Jewish religion. I kept my faith and Mary Louise kept her faith, and there hasn’t been a problem,” Bert said matter-of-factly.

Each having been in a previous marriage — the two did not get married until Mary Louise was 38 and Bert was 42 — they consulted Bert’s Rabbi, Mary Louise’s pastor and a marriage counselor before they tied the knot.

Bert’s list of reasons for falling in love with Mary Louise is a mile long, but he cited her personality, intelligence, sophistication and morality for reasons he’s loved her for almost 50 years.

Mary Louise herself loves his kindness and providing nature.

“If he thinks I want something, he goes out and gets it,” she said.

The couple believes that the success of their marriage comes from wanting the other person to be happy and working to make sure that they are.

“We want to be happy and have a happy marriage, and we work towards it,” Bert said.

Mary Louise also said that couples should “accept the differences and accentuate the positives” in their relationship.

(This article originally appeared in the Wednesday, February 14 issue of the Demopolis Times.)