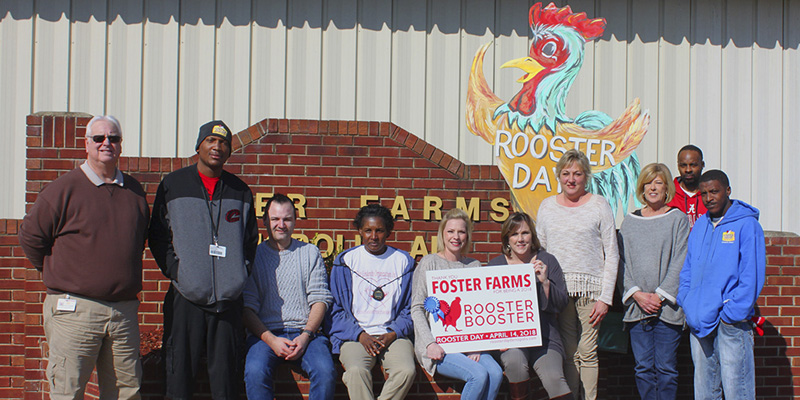 Foster Farms is among the first to support this year’s Rooster Day as being a “Rooster Booster.” Rooster Day is organized annually by the Marengo County Historical Society and this year will be held Saturday, April 14, in downtown Demopollis.

Rooster Day will be April 14 this year and will feature a new Rooster Day Art Exhibit at Bryan W. Whitfield Memorial Hospital from March 18 to April 29. The art exhibit will feature local artists and their best rooster-themed art.

Artists must be at least 16-years-old in order to submit work. Paintings, drawings, photographs, digital artwork and other 2D art is accepted as long as it is tied to roosters, Rooster Day or the Rooster Auction of 1919. All art must be ready for hanging and dropped off at the Canebrake Craft Corner at Bluff Hall by March 9 to be featured in the showcase.

Kirk Brooker, Operations Director for the Marengo County Historical Society, said that the exhibit was inspired by the quarterly art exhibits that the hospital features. However, the exhibits at the hospital usually only feature one artist, and the historical society wanted to do a community-wide call for art.

“A lot of people who paint as a hobby wouldn’t have enough pieces for an exhibit. So, this way they can just put in one piece and still be featured,” he said.

Artwork can be viewed during operating hours of the hospital and will be returned after the exhibit has closed. An opening reception will be held on March 18 at 2 p.m.

Also new this year, Rooster Day will feature a 1K race, which will take place simultaneously with the 5K but will take a different route.

Applications are due March 8. There is a $75 booth fee if the application is accepted. Late registration will be available as long as space permits but will cost an extra $25. Vendors will be notified of approval by March 15.

Brooker said that applications are open for “any type of art or craft, but it has to be yours. It has to be handmade.”

Suzanne Young, Co-chair of Rooster Day, said that the Rooster Fair is “always so much fun for families.”

“I love watching everyone come together for the activities, entertainment and delicious food,” Young said.

Rooster Day will also feature “coop games” for children, food vendors and an entertainment stage with performances lasting all day. Performance will include music, dog commands, demonstrations and a skit reenacting the Rooster Auction of 1919.

Following the day events, a silent auction and a live auction will take place from 6-8 p.m. at Lyon Hall, followed by a live band, heavy h’ordeurves and BYOB with set-ups.

Tickets are available for $20 the Canebrake Craft Corner or at the door.

Amanda Hall, Co-chair of Rooster Day, said that the Rooster Auction is a “must-attend.”

“We are so fortunate to have individuals and businesses in Demopolis, Marengo County, and surrounding counties who give so generously.”

All applications and registration forms can be found at the Canebrake Craft Corner or online.

For more information, call 334-289-9644 or email marengohistory@bellsouth.net. Questions can also be answered at the Canebrake Craft Corner and on the Marengo County Historical Society’s Facebook page.

(This article originally appeared in the Wednesday, February 21 issue of the Demopolis Times.)