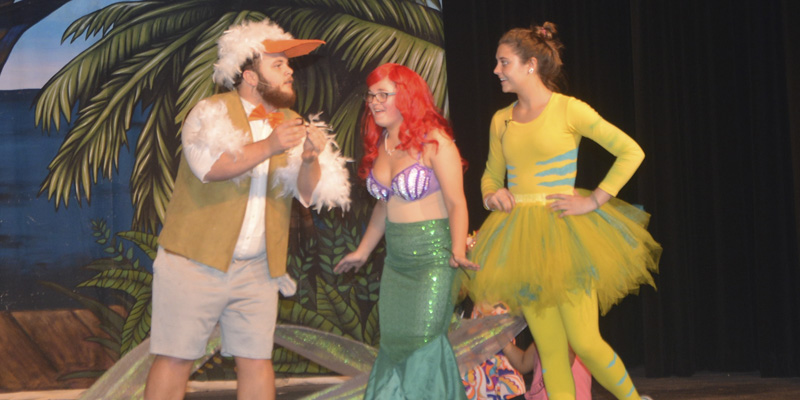 Austin Hall, Maggie Bradley and Sally Mackey run through their lines during a dress rehearsal of the Tiger Arts Guild’s production of “The Little Mermaid Jr.” The musical will be open to audiences on Thursday, Friday and Saturday at 7 p.m. with a Sunday matinee at 2 p.m. Tickets will be available at the door for $7.

“The Little Mermaid Jr.” is swimming to the stage at Demopolis High School this Thursday, Friday and Saturday at 7 p.m. and this Sunday at 2 p.m. Since the musical is modeled after the Broadway play, attendees can expect songs not sung in the Disney classic.

Thirty-five students, including 10 departing seniors, make up the cast and crew for this production.

“They have all worked really well together,” said Jody Tartt, director and DHS’s theater teacher.

“The Little Mermaid Jr.” follows the Tiger Arts Guild’s (TAG) tradition of having a stage adaption of a Disney movie as their spring musical.

“We’ve done ‘The Lion King’ and ‘Aladdin’, and so it just seemed fitting to follow it up with another one. And a lot of people have been asking about ‘The Little Mermaid’ for a while,” Tartt said.

Tartt said that casting was done before Christmas break, and rehearsals started the day the students returned on Jan. 4.

Rehearsals for the musical numbers took place in three stages. Music Director Madaline Jacobs worked with students on the vocals. Once the songs were learned, Choreographer Kelley Smith taught the students the dance steps. Tartt then polished everything by working on staging.

“It’s been a lot of fun. They’ve worked hard to get this far. It’s exciting to work on such a classic Disney show that everyone is so familiar with,” Smith said. This is her first time choreographing a TAG production.

According to Tartt, rehearsals were often challenging because several students had the flu and missed several practices in a row.

The students, however, were determined to make the production a grand experience, especially the seniors who wanted their last show with TAG to be as memorable as possible.

“This is the ‘go big or go home’ for us,” Senior Christopher Hoven said.

He and fellow senior, Brian Tripp, have been held onstage and backstage roles with TAG since they were freshmen. Before then, they were involved with the Canebrake Players.

“The memories that I make in the theater are the best memories of my life,” Tripp said.

Tripp and Hoven both consider the cast and crew members to be their family and York-based artist Garland Farwell is no exception.

Farwell has been a set designer for TAG on-and-off for nine years. He works the design class, letting them come up with their own ideas for the set pieces and then helping to flesh them out.

He and the students will transport attendees to King Trident’s throne room, Ariel’s grotto, Ursula’s lair and Prince Eric’s ship and castle among other places.

Tartt said that set pieces needing to be moved easily presented a unique challenge. Many pieces are double-duty, such as King Trident’s throne, which also serves as Ariel’s grotto.

Other pieces have been recycled from earlier performances, like Prince Eric’s ship and the hand-painted backdrop.

Garland, who often works alone in his studio said that designing the sets with the students is the “one real bright spot” in his year.

“To watch them grow in confidence with the tools, building, construction and making their own decisions—it’s very gratifying,” he said.

Tickets to “The Little Mermaid Jr.” are available for $7 at the door.

(This article originally appeared in the Wednesday, March 7 issue of the Demopolis Times.)