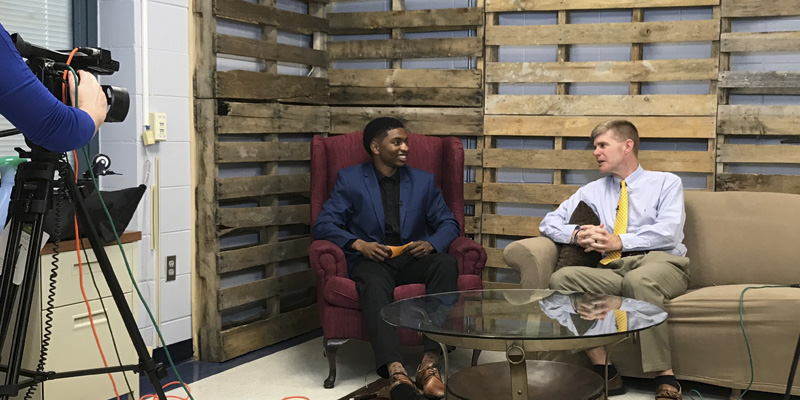 Students and faculty within the Demopolis City School System have unveiled a new broadcast journalism series called DCS Tiger Talk, which is geared towards keeping parents of students enrolled at any of the four schools up-to-date on what’s going on.

Episodes are posted every other week to the DCS website and to the website of whichever school is showcased in that particular episode. They are between 15 and 25 minutes long.

“We just want parents to see this because this is where they will get the information they need,” said Meggin Mayben, who teaches one of the broadcasting classes at Demopolis High School and the class at Demopolis Middle School.

Tiger Talk is a collaboration between the four schools. Each school films its own segments – aside from Westside Elementary, which relies on the DHS team for filming – with the broadcasting team in the high school being broken into two classes. Jeremy Smith’s students are responsible for filming, and footage is sent to Mayben’s students at DHS for editing. “They have to learn how to put it all together and create a piece,” she said.

Courtney Kerby’s marketing class at DHS also has a hand in producing Tiger Talk. Her students provide all the marketing services for the show, such as designing the logo and selling sponsorships.

The first episode of Tiger Talk aired in February, but it’s been in the works since the start of the year. The show falls under the umbrella of Tiger TV, which also includes a student-oriented show for each school.

Tiger Talk was originally combined with the student-oriented series, which has a different name at each school, but episodes were thought to be too long and boring, so they were separated into two shows.

“We shortened it and made it more specific, so it works a little better,” Mayben said.

According to Mayben, Tiger Talk focuses on “anything good going on in the school system.”

One major benefit of Tiger Talk is that it provides more information than a simple Facebook post or tweet. It also gives parents something positive to focus on.

The number of students somehow involved in broadcasting has been growing, and Mayben hopes to grow it even more.

“We are hoping for it to grow and for kids to fill up the classes,” she said.