A Bigfoot sculpture has appeared towering over visitors of Spillway Falls Park. The 10-foot creation took about 10 days for wood carver Ed Davison to bring to life, with the help of James Smith, who served as Ed’s “support staff” by taking care of the saws, refueling and some carving.

The true artist, however, is Davison. Davison said that he has no set process for sculpting. He creates his sculptures by sight and judgment alone. 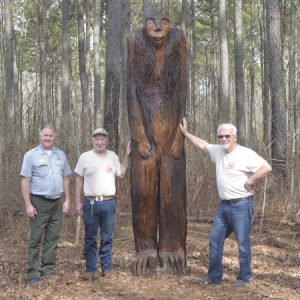 Davison works mostly with saws, but he also uses other tools like sanders and even pocket knives in his work.

He also said that sometimes he will start with one thing in mind and change midway through. No matter what though, Davison will finish a project.

“It may not please me — the end product — but if it pleases you, then I’ve achieved what I wanted to achieve,” he said.

According to Davison, he had to scale Bigfoot down a bit in order to make the proportions match what he was envisioning. According to him, his Bigfoot is one of his largest creations, rivaling the totem pole that he carved in early 2017, which is also in Spillway Falls Park.

Twenty-five of his creations have homes in Spillway, and another 20 or so live in Foscue.

Occasionally, as Davison walks the trails to pick up stray limbs or garbage, he’ll find little notes tucked away with his sculptures, thanking him for his creations.

“It makes me feel pretty good. It does. It makes you feel good to see folks enjoy stuff like that.

Davison creates his sculptures for the park for free, not counting the fuel and tools they provide.

Despite having the skill of someone with years under their belt, Davison has only been sculpting for three years.

“I was bored to death, and I needed something to do,” he said.

According to Davison, Bigfoot and his other sculptures bring two things: people to the park and smiles on park-goers faces.

“That’s the best part of it. Seeing how people react to these. I had no idea that there would be so much joy in a sculpture like that. And it’s brought more people down to the parks just do come down and look at things,”

He also said that he considers himself “very lucky to have James [Smith] as a partner.”

“That’s made life a lot easier, and it’s made it simpler for me to do,”

Davison and Smith are Park Host Volunteers at the park in exchange for space to keep their campers. Davison said that he’s been camping in Demopolis on and off since 2014, but his current stay has lasted a year and a half. Park Host Volunteers are responsible for tasks such as opening and closing the gate, keeping the park clean and working security.

“He and his many carvings are still bringing smiles to the visitors of our parks. We appreciate Ed and all of his carvings,” Sherrod said.

(This article originally appeared in the Wednesday, March 7 issue of the Demopolis Times.)