Tuscaloosa mayor and candidate for Alabama governor Walter Maddox was in Demopolis Wednesday night to speak at an event hosted by the Marengo County Democratic Executive Committee.

Maddox, who just last year was sworn in for his fourth term as the mayor of Tuscaloosa, touted his record as mayor, including leading efforts to rebuild after a 2011 tornado destroyed over 12 percent of the city. 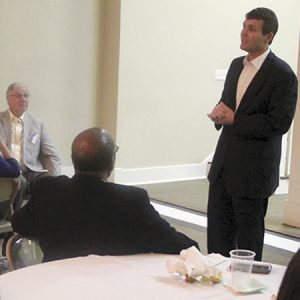 The candidate said that he felt this year’s governor’s election marks an important time for Alabama residents.

“I know it has been said before, but this is the most important election in recent history. Our state is in crisis in so many ways. Twenty percent of our bridges are functionally obsolete, we rank 46-50 in any education indicator, and we have hospitals closing because we did not extend Medicare. Republicans have had complete control and where I come from there are no excuses,” Maddox said.

Part of Maddox’s plan to fund improvements is a state lottery that he said would generate $300 million per year, which he would use to fund universal Pre-K, a scholarship program, funding for “equalizing funding for state schools,” and in establishing a community innovation group to tackle “mental and healthcare deficits.”

“I know people have mixed feelings about a lottery, and I understand that,” Maddox said.

Maddox also said he would work to legalize gaming in those counties that have already voted in approval and reach a compact with Poarch Creek Indians.

“We will hold a special session to ratify the state’s constitution to match those counties that have already voted (in favor of gaming). That will end the raids and allow for the state to collect those taxes.

“Some call gaming the ‘poor man’s tax,’ but the bigger tax is lack of prenatal care, education … those things that hold people back,” he said.

He said the lottery would be run through a public organization.

Maddox said the Republican majority in Montgomery has proven ineffective in dealing with the problems facing the state.

“Since 2010, eight hospitals have closed because we did not extend Medicare. They could have solved this problem at any time, but didn’t by their own choosing. We have people from neighboring states coming in to fill our jobs because we do not have a skilled workforce. These problems will only get worse if we don’t do something,” he said.

Bill Coplin, chairman of the Marengo County Democratic Executive Committee, said he feels Maddox is the right person at the right time for Alabama.

“He is young, but he is tested and he has the energy to take the state forward. He has all the intangibles to get our state moving forward. When you wake up on a Sunday morning and 12 percent of your city is destroyed … they don’t teach that in school and Tuscaloosa has come back better than ever,” Coplin said.

Maddox is a Tuscaloosa native and graduated from Central High School in 1991. He earned his bachelor’s degree in political science and master’s degree in public administration from the University of Alabama at Birmingham. He is married to Stephanie Maddox and they have two children, Taylor, 15, and Eli, 4.