Clay Allen Bishop Jr. and Dr. David C. Mellown were each honored with the 2018 Hugh A. Lloyd Lifetime Scouting Achievement Award at the second annual award luncheon held at the Demopolis City Civic Center on March 8. They were honored because of their achievements in the Boy Scouts of America Prairie District and in the community.

Alabama Secretary of State John Merrill gave the keynote address at the luncheon. During his speech, Merrill offered audience members $100 if they could name Alabama’s previous six senators. When no one accepted the offer, he asked the audience to think of the names of their first teachers, pastors and scoutmasters. 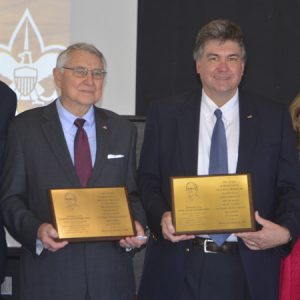 David Mellown, left, and Allen Bishop are this year’s recipients of the 2018 Hugh A. Lloyd Lifetime Scouting Achievement Award.

Merrill said that the names that popped into our minds instantly were the most important ones.

“Just because you have an important position does not mean you’re an important person. What makes you important is the kind of difference you make in your community,” he said.

Once Merrill was finished speaking, John Northcutt presented the awards to each recipient.

Bishop received his Eagle Scout in 1981 from Troop 41in Demopolis and received the certificate of Merit for Heroism from the Boy Scouts of America. He graduated from the University of Alabama with a degree in Corporate Finance in 1986 and from the LSU School of Banking of the South in 1996. He is currently Senior Vice President for the Robertson Banking Company.

While accepting his award, Bishop looked back on the opportunities he received during his time with the Boy Scouts.

“Over the years, scouting has made me able to work with great people,” he said.

Mellown was Assistant Scoutmaster for Troop 41 and the Prairie District Chairman for many years. He completed his Doctoral studies at the University of Alabama Birmingham School of Dentistry in 1959, having since retired from his dental practice in Demopolis. He is also a retired Lieutenant from the United States Navy.

During his acceptance speech, Mellown thanked all of those who help fund the Boy Scouts of America and who are leaders within their communities.

“We can’t have successful scouts without great leaders,” he said.

The award was named in honor Hugh A. Lloyd, who was committed to the Prairie District of the Black Warrior Council, which includes scouts in Marengo, Hale, Greene and Sumter counties.

District Attorney Greg Griggers is the chairman of the event.