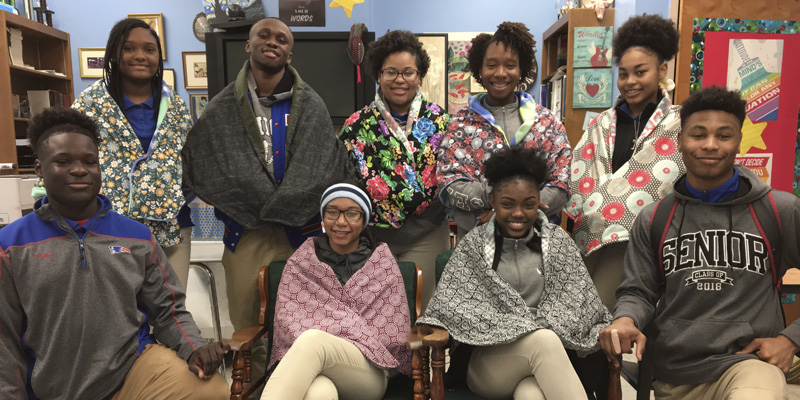 Seven members of the LHS Student Council were more than happy to try on the quilted hugs before delivering them to the Marengo Nursing Home. Pictured here are nine members of the LHS Student Council including, from left, (front) Mekhel Miller, Jordan Thomas, Dajia Miller, Isaiah Scott; (back) Jakayla Rogers, William “D.J.” Dukes, Briana Johnson, Jessica Robertson, and Anna Scott.

The multi-generational project involved a day-long sewing workshop in the library at Linden High School.  At the end of the day, the result of the project was seven “quilted hugs.” These handmade shawls were donated to residents of Marengo County Nursing Home. 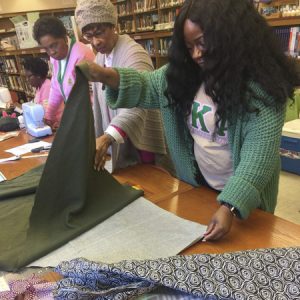 LHS Student Council advisor Mitzi Gates credits her colleague LHS librarian Marnise Stevenson, who is also a member of the Nu Nu Omega Chapter of AKA, not only with the idea for the project partnership but also with the success of the sewing workshop, which was attended by 17 students and six AKA members.

“Mrs. Stevenson always has wonderfully creative ideas for community service projects, and she’s an avid quilter, so I wasn’t surprised when she emailed me a picture of a ‘quilted hug’ as a suggestion for this year’s project,” Gates said. “What surprised me was that she wasn’t proposing that we buy the quilted hugs and let the students deliver them; she was actually proposing to teach the students to make them. And that’s exactly what she did. The sewing workshop was a grand success. The students were amazed by their hidden sewing skills, and they were so excited to know that a nursing home resident would enjoy the cozy warmth of a quilted hug that they helped make.”

One of the target programs of AKA is Seasonal Wraps, which provides season appropriate clothing for those in need, making the LHS/GPA Quilted Hugs Sewing and Sharing Project a perfect partnership opportunity, Gates said. The partnership project was funded in part by the LHS Student Council annual Boo-Gram fundraiser and in part by a donation from AKA Sorority.