The Marengo County Commission gave $5,000 to Heart of Marengo Chamber of Commerce and will consider giving more at the start of the new fiscal year in September.

Kenneth Barrineau, acting director and chairman of the board for Heart of Marengo, asked that the county enter a two-year contract with the organization for $10,000. Barrineau said that he hopes to use that money to seek grants that will “promote economic development in every facet of the county.” 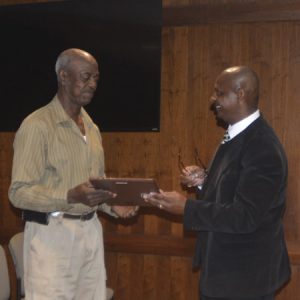 “We want you to know exactly where the money is going, what we’re using it for, the ideas that we’ve got about it, to do some research and development and to find out things that we can do for the county that you might ending having to hire somebody to get that information for you,”

While the commission did not enter a contract with the organization, they did amend the current budget following an executive session to give them half of the funds requested and will revisit the request later in the year.

Heart of Marengo currently has 111 members from three counties. Some members live in another county but own a business in Marengo County. There are approximately 13 members on the board.

According to Barrineau, Heart of Marengo hopes to work alongside other chambers of commerce to fill needs in communities that have “never been represented by anybody.”

• The commission unanimously approved the Chickasaw State Park Custodial Agreement for the next year.

• There was a resolution honoring recent retiree Leroy Autery, who was a truck driver in the Road Department.

• Rosie Rosenmoore was appointed as the Center Manager at the Dixon Mills Nutrition Center.

• Probate Judge Laurie Hall announced that the polling place for Myrtlewood in District Five has been moved back to Myrtlewood Town Hall. It had been temporarily moved while the town hall underwent repairs.

• Commissioner Michael Thompson said that he will look into cleaning logs along County Road 4 after a resident complained.