Alabama Secretary of State John Merrill was in Demopolis Wednesday as a guest of the Demopolis Rotary Club. During the club’s meeting, Merrill spoke about the responsibilities of his office as well as his goal to ensure the integrity of state elections.

The secretary outlined the duties of his office, speaking specifically about elections. 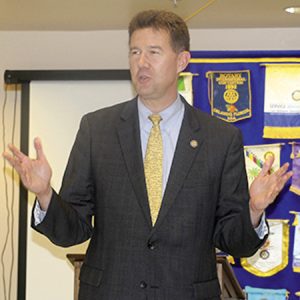 “My goal is that every U.S. citizen who lives in Alabama is eligible to vote and has a valid ID,” he said, adding that his office has identified at least three locations where identification card drives are held each year.

“We continue to raise awareness of voter registration and the voter ID,” he said.

Merrill said much of the criticism of the voter ID requirement in Alabama is unfounded, citing that his office has registered over 930,000 voters since 2015, which he described as “unprecedented in the history of the state.”

“People have the right to their opinions, but not to their own facts,” Merrill said.

He cited the number of votes cast in recent elections, which he also described as unprecedented. In the 2016 presidential primary, he said 1.25 million votes were cast, in the presidential election a record 2.1 Alabamians voted, and in last year’s special U.S. Senate election, 2.3 million went to the polls.

Recent legal efforts to stop the voter ID requirement have also been defended successfully, he said.

“A federal judge dismissed a lawsuit (brought by the NAACP), saying every state should be doing what Alabama does. We are making it easier to vote and harder to cheat,” Merrill said.

When asked about possible voter fraud in some counties, Merrill said there has been no proof of it happening. “There is no county where we had more voters than residents. Some of the problem has to do with inaccurate census numbers.”

He said there were attempts by outside agents to scan the voting system during the 2017 presidential election, but that no breeches of the system occurred.

The office of Secretary of State has undergone changes since his election in 2014, according to Merrill, as he said filings that used to take months was now being done within days.