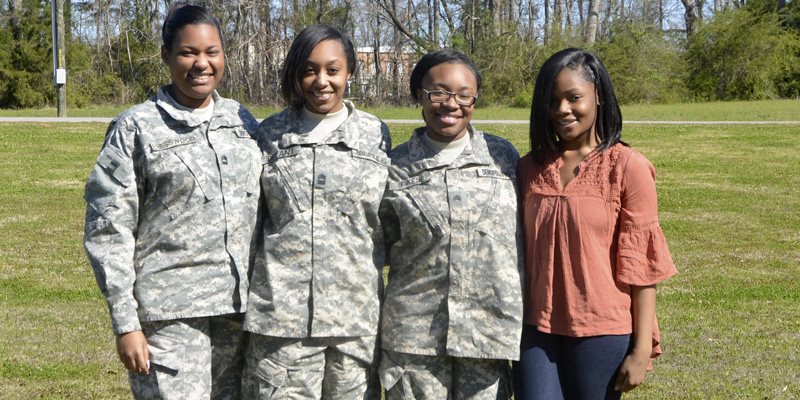 “They keep us out of trouble. They keep us straight. They motivate us to be better people,” she said.

Jackson enjoys basketball and shopping. Her favorite class is JROTC.

Fikes said that being part of the JROTC has changed her for the better.

“It basically helped me become a better person, and I now know how to stay motivated.”

She also said that, since they are now role models for other cadets, they will “stay dedicated to our work and do the right thing so others can look up to us.”

Bryant said that she was excited to be a role model for other cadets. She also said that being a part of JROTC has had an important impact on her life and her future.

“It’s applying me more to my work, and it’s given me more information about the army and what I plan on doing in my life,” she said.

Bryant enjoys volleyball, softball and singing. After graduation, she wants to continue JROTC in college and attend the University of Alabama at Birmingham to become an army nurse.

“By winning this I feel that I have everybody looking up to me as being Miss JROTC, and I should help everybody be positive and help them keep their minds on what they want to do in their future.”

Presswood enjoys hunting and shopping. Her favorite class is math. After graduation, Presswood plans to join the U.S. Air Force.

Lewis said that the students were chosen by their peers because they were the most outstanding female cadets in each of their grades.

“When you want to see what ‘right’ looks like, those four girls demonstrate that all the time.”