Burke told the membership that Alabama’s recovery from the recession has been slower than that of the nation overall, but that the state is ahead of the nation in terms of bringing back manufacturing jobs. 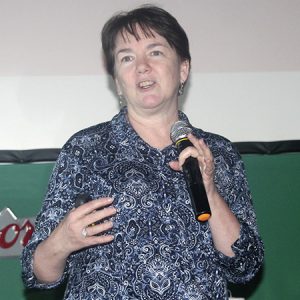 Maria Burke, an economic forecaster with Alabama Power Company, speaks to members of the DABC about the state and local economy.

“Alabama’s employment recovery has been slower. We lost a lot of manufacturing jobs, which are harder to get back. A lot of effort has gone into bringing them back which is one reason we are ahead of many states in that area,” Burke said.

According to Burke, the nation as a whole was fully recovered from the recession in 2014. Alabama, she said, could take another six months to realize full recovery.

Another area that hurt Alabama is in construction jobs, which lost about 26,000 jobs to the recession and that there is less construction now than in the previous five years.

Locally, Burke said Marengo and surrounding counties lost about 2,100 jobs and that currently those counties are about 37 percent recovered.

“You are on the upswing. There is not a lot of expectations right now for rural counties, but you are working together to change that expectation,” she said.

The median household income is also improving, which is one area where Marengo County is tracking well.

“It is a good sign that the county’s growth is outpacing the state’s growth,” Burke said. “You are more recovered than the state, but the state is making good progress.”

Burke added that Alabama is poised to recover due in large part to its diversity.

“We have a robust industrial class in the things we produce. That diversity gives us strength.

“Overall the state economy is growing and we are making good use of what we have. I think we are on a good path,” Burke said.

During the DABC meeting, the members also heard from representatives of Business Alabama, a magazine that will be featuring counties in the Blackbelt in an upcoming edition.

DABC President reported that the first class of students in the HVAC program would be graduating this year. Several local businesses helped implement that program by providing materials and equipment.

(This article originally appeared in the Saturday, March 31 issue of the Demopolis Times.)