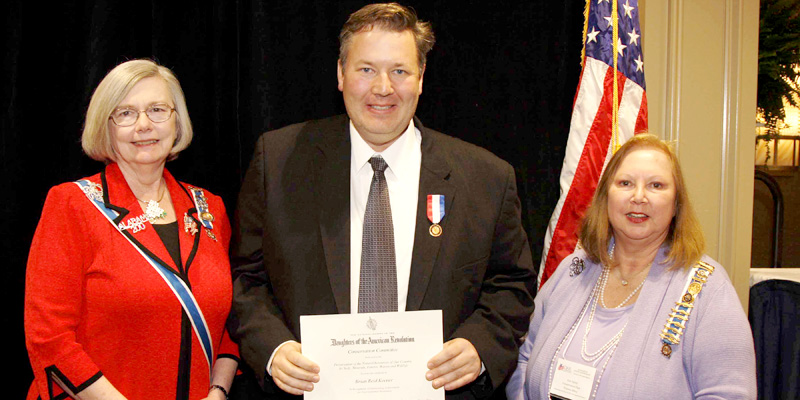 Dr. Brian Keener, a biology professor and curator of the UWA Herbarium, was recognized at the Daughters of the American Revolution State Convention in Auburn for his work in conservation and environmental awareness. Pictured left to right are DAR State Regent Nancy Folk, Keener, and DAR Alabama Conservation Committee Chair Pam Spivey. Keener was nominated for the award by the Bigbee Valley Chapter of DAR.

The University of West Alabama’s (UWA) Dr. Brian Keener was presented a conservation award at the Daughters of the American Revolution (DAR) Alabama state convention held at Auburn University on March 9.

Keener is the assistant dean of the School of Graduate Studies, assistant professor of biology and the curator of the UWA Herbarium. He is known and respected statewide as an accomplished botanist and for his discovery of a rare species of mint in the Talladega Forrest in Talladega, Ala.

The award is presented by the DAR Conservation Committee, which is dedicated to the preservation of the natural resources of the nation, its soils, minerals, forests, waters and wildlife, and it recognizes outstanding achievement for environmental awareness.

The award recipient is chosen from nominations by local DAR chapters throughout the state. Keener was nominated by the Bigbee Valley chapter.

“Our chapter selected Dr. Keener to be our only nomination to the committee,” said Lucy Gallman, who has been a member of the Bigbee Valley Chapter since 2010. “We nominated because we’re proud of all of his research, but specifically his work with the Plant Atlas.”

The Plant Atlas is a website that documents thousands of different plant species from across America. Keener, who serves as president of the Southern Appalachian Botanical Society, directs the Alabama portion of the Atlas.

The Alabama Plant Atlas has the largest catalog of plant species on the website with 196,035 specimens on file accompanied by 4,618 images. By uploading the specimens and images that have been discovered in Alabama by the UWA Herbarium and the Alabama Herbarium Consortium, Keener and colleagues make accessible to people worldwide a wealth of information and research. It’s an accomplishment that Gallman wanted to see honored.

“I just felt that he needed to be recognized for all his hard work,” Gallman said. “His efforts in documenting Tutwiler’s Spleenwort for the Plant Atlas is particularly special to us as it honors Julia Tutwiler.”

DAR is a membership service organization for women who are directly descended from a person involved in the United States’ efforts towards independence. A non-profit, they work to promote education, patriotism and historic preservation. The group was established in 1926 and provides scholarship opportunities for rising college students as well as grants for local historic projects.

Keener joined the faculty at UWA in 2003. He earned his master’s and doctorate in biological sciences from the University of Alabama. A Gallant, Alabama native, Keener teaches courses in botany, aquatic plants, plant systematics and invasive species of Alabama.

(This article originally appeared in the Saturday, March 31 issue of the Demopolis Times.)