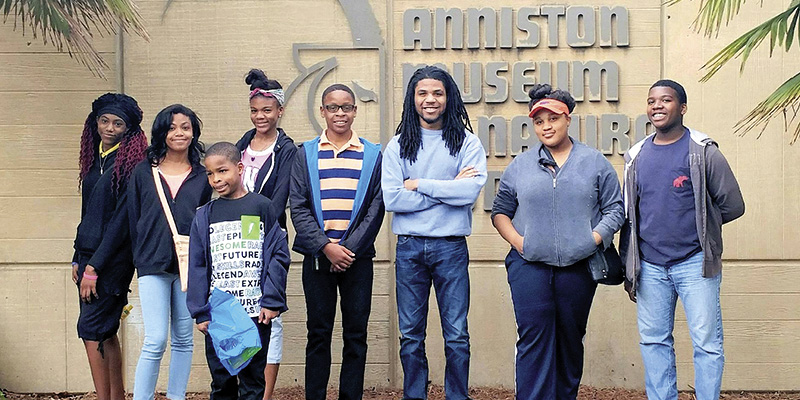 Students who traveled to the Museum of Natural History in Anniston, Alabama on a trip organized by the Demopolis Women of Faith are, from left, Destiny Rembert, Charmaine Paulding, Nefeon Murdock, all three from Friendship Baptist Church; Trent Gracie, Tristan Mullen, Josie Gracie and Demetria Cunningham, all of New Morning Star Baptist Church.

The organization sold dinners plates and other items in order to raise the funds to take the kids on the trip. Members also sponsored students to go.

Willie Dillard, volunteer liaison for the group, said that they took the kids on the trip in order to “expose them to other things.”

“They were able to see and experience things that they have not before,” she said.

Dillard said that the kids had a great time learning about everything at the museum and asking questions about what they saw.

“They seemed to be surprised because they had never seen the different types of animals except for on TV, and this was close up.”

This is not the first time the Women of Faith have taken local students on an outing before. Last year, the group took several kids to Branson, Missouri to watch the play “Moses,” as well as other fun activities such as visiting an amusement park.

Women of Faith are seeking donations for its “Holiday Brown Bag Program” and thank County Commissioner Freddie Armistead, Pastor Fred Moore of Christian Chapel Baptist Church, and Pastor Terry Gosa and wife of Eastern Star Baptist Church, and Jay Shows of Best Western for their recent donations to the program. For more information or to make a donation call 289-0574.