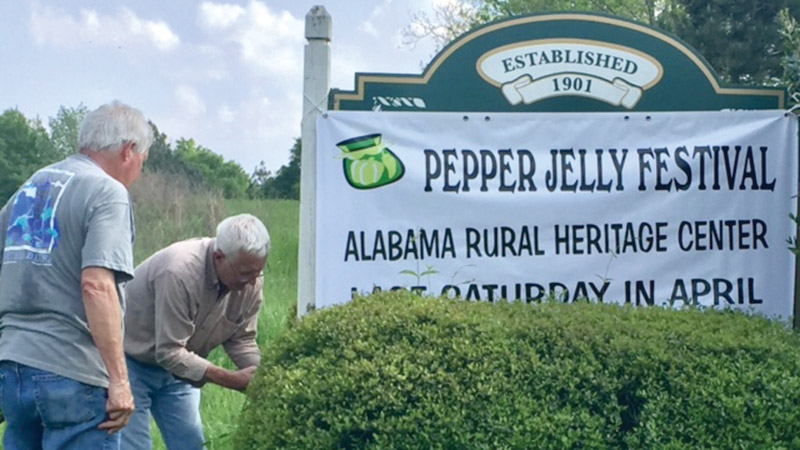 Volunteers in Thomaston are gearing up for the annual Pepper Jelly Festival to be held on Saturday, April 28.

Annual event will be held at Heritage Center, April 28

The Town of Thomaston is gearing up for its famous Pepper Jelly Festival scheduled on April 28 at the Alabama Rural Heritage Center grounds from 10 a.m. to 3 p.m. Local musicians will perform all day, and local artisans will sell their crafts at booths. BBQ plates and other food vendors will also be available.

“There is a lot of hard work that goes into this, and it brings a lot of people into Thomaston. It’s a lot of fun,” said Lisa Griffith, chairman of the Alabama Rural Heritage Foundation.

Formerly known as Rural Fun Day, Pepper Jelly Festival was renamed 10 years ago after the pepper jelly made and sold by the ARHF. Naturally, the jelly will be sold at the festival, as well.

Artisans will be selling handmade items like soap, woven baskets, birdhouses and wind chimes. There will even be an arrowhead-making booth for the kids.

“You name it, we usually have it,” Griffith said.

The festival gives artists a chance to showcase their creations.

“We try to bring different things local to Alabama that are considered a lost art,” Griffith said.

Children will also be able to bounce on inflatable bounce houses, courtesy of the Heart of Marengo Chamber of Commerce.

There will be seven musicians at the Pepper Jelly Festival. The musicians, in order of performance, are Rebecca Boler Vick, Cole Vick, Glory Road, Josh and Kayla Gill, Trey Webb, Mitzi Gates and Tammy Shaw.

Kathryn Friday, board member for the Alabama Rural Heritage Center, described the festival as a day where high school reunions are scheduled, old friends reconnect and new friends meet.

“It’s just a good time for the community to visit.”

Friday and other board members are kept busy selling pepper jelly, which is shipped all over the country and sometimes overseas, but that doesn’t stop them from enjoying the festival.

“Even though we’re tired at the end of the day, we had a good day.”

Thomaston Mayor Jeff Laduron said that last year’s festival was the biggest it has ever been, and this year is expected to be bigger.

“We’re just excited about it. It brings a lot of people into town,” he said.

Friday said that vendors must register as soon as possible to have a booth. The booth fee is $40 for artisans and $50 for food vendors with an addition $10 charge if the booth requires electricity.

Prospective vendors can email the ARHF at ruralher@frontiernet.net or call at 334-627-3388.

Women of Faith sponsor student trip to Museum of…