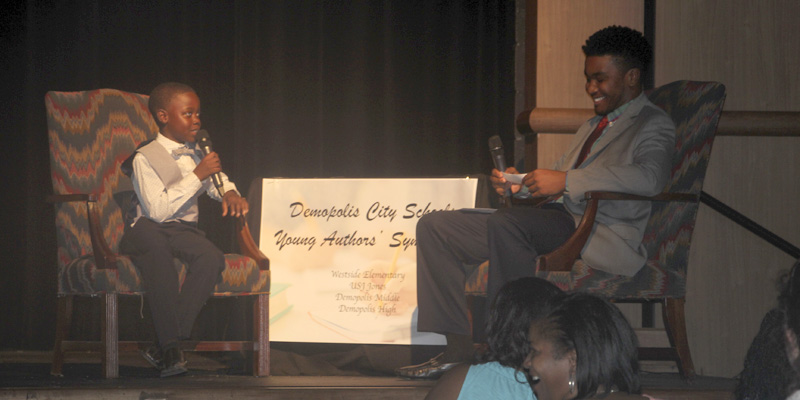 Trevion Williams, left, a second grader, answers questions for Xavier Jackson, moderator of the annual Young Authors Syposium held Tuesday at DHS. Williams was featured for his piece, “If I Were the President.”

The symposium features the written works of students in each grade, from kindergarten through twelfth, and was sponsored by the DCSS, Dempolis Public Library and the Demopolis Parent/Teacher Association. 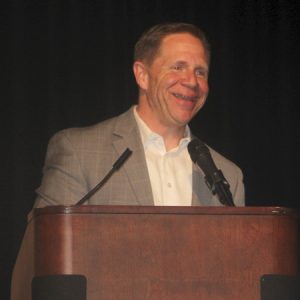 This year’s featured author and keynote speaker was Dr. Joe Savage who is also the founder and executive director of Roads of Hope, an organization that provides safe houses for at-risk orphaned girls. His latest book it titled, “We Forgot! The 7 Unlearned Lessons of 9/11.” He has spoken to organizations around the world.

A former college athlete, Savage spoke to the young authors, saying it is important that they continue to write, citing the many different mediums through which writers have influence.

He added that by learning about a topic and writing about it, an author can spread knowledge.

“When you learn and can write in such a way that people can understand it, you become an authority (on that topic).

“All parents and guardians should encourage their kids to write … we need great writers and I believe the greatest writers in the world can come from Demopolis, Alabama,” Savage said.

Following the speaker, the student authors and audience moved to the DHS gymnasium where their works were displayed.

The student authors featured were:

(This article originally appeared in the Saturday, April 7 issue of the Demopolis Times.)