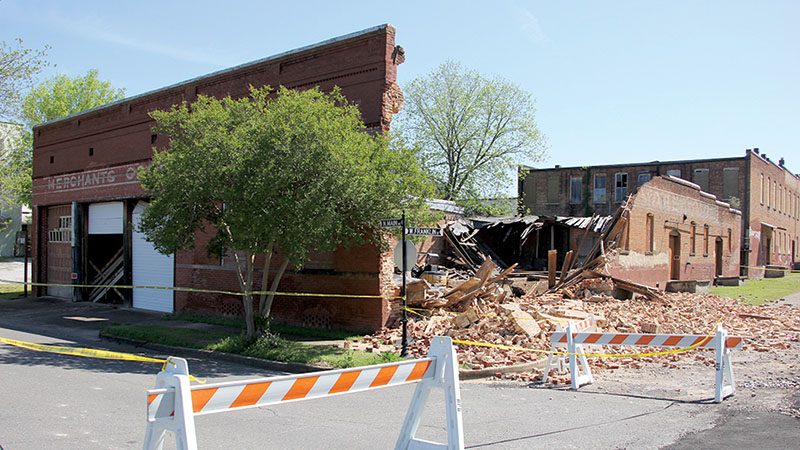 The south side wall of the Rosenbush Warehouse collapsed Monday.

An historic downtown building — known to many as the old Merchants Grocery or the Rosenbush Warehouse — was damaged Monday night when the south side wall collapsed.

According to Demopolis Public Safety Director Tommie Reese, no one was inside the building when the wall collapsed late Monday. The Demopolis police and fire departments responded to the scene to ensure no one was inside. Law enforcement barricaded the area for safety.

Demopolis Building Inspector Julius Rembert said he and other city officials were planning to meet Tuesday afternoon to discuss the structure and how to proceed.

The owner of the property, Lucy Hicks, has been notified, according to Reese. Hicks purchased the building in May 2017 for $3,500 with plans to possibly utilize the building with some form of community outreach, possibly involving photography as the Coca-Cola sign painted on the north side of the building is a popular photography subject.

City officials had tried to find a buyer for the building for several years before it was purchased by Hicks.

The structure, along with the Rosenbush building that now houses the Marengo County Historic and Archive Museum, were donated to the city in 2003 by the Bert Rosenbush family.