A Demopolis man has been arrested for assaulting a female who had told police she was held by the suspect for two days. 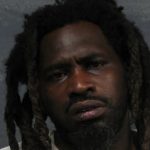 According to the Demopolis Police Department, Brian Demond Sams, 36, of Demopolis was arrested in March on one count of third degree domestic violence. The arrest came after officers responded to  a residence where the victim stated she had been held for two days and during that time was assaulted by Sams.

The victim told police she managed to escape and go for help after throwing boiled water on Sams.

An investigation into the incident found that the victim was not held at the residence as she claimed, but that she had been assaulted by Sams, according to a DPD statement.

Following his arrest, Sams was transported to the Marengo County Detention Center to await a bond hearing.

The Demopolis Times reminds readers that all suspects are considered innocent until proven guilty in a court of law.

(This article originally appeared in the Wednesday, April 11 issue of the Demopolis Times.)