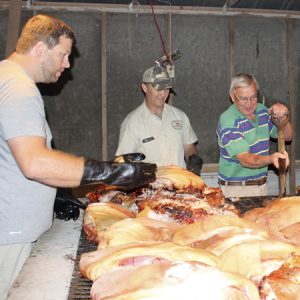 Tony Luker, Wayne Langley, and Buddy Lindsay turn shoulders of pork for the other side to cook during last year’s Jefferson barbecue event.

For nearly 50 years the event has been the community club’s primary fundraiser for community service projects. Friends and neighbors have come to enjoy the springtime tradition and the delicious meal.

“We’ve been doing this for a long, long time,” said David Compton, president of the club this year.

In Jefferson, they’ve been making barbecue, good barbecue, for as long as most folks can remember, so the technique and recipes are fine-tuned. It goes without saying that the ladies have perfected their potato salad and cake recipes, too.

“We all have jobs that we do each year, and we’ve done it for so long it’s like second nature, but we still do a lot of preparing and work in the weeks leading up to the barbecue,” Compton explained. “This is an important day for us, so we like to make sure we do everything we can to make sure people have enjoy their meal and have a good time catching up with old friends.”

Established in 1953, Jefferson Community Club is the last remaining club of its type. In its early days, the club competed against other community clubs in the areas of farming, land management, community service, crafts, cooking, and more. Now, the club centers its focus on fellowship and community service projects.

Past barbecues have funded maintenance at the historic clubhouse, like the addition of a handicap accessible deck, a second dining room, renovations, and maintenance, and all that’s necessary for this annual event. In fact, it works so well, it’s used twice a year, with the second barbecue being held in October by the Jefferson Volunteer Fire Department. Members of the VFD lead the cooking effort.

“We have a dedicated group that cooks the meat all day and night over hickory coals on a concrete pit that we built more than 30 years ago,” Compton explained. “Thanks to funds raised by the barbecue each year, we’re able to maintain the pit and keep a roof over it to protect it from the elements.”

Although the elements, rain in particular, have put a damper on the event in years past, it doesn’t stop the show.

“The Jefferson Barbecue happens rain or shine,” Compton said. “Some years we have to wear jackets and other years we turn the A/C on high, but we’re ready, no matter what. We serve inside, but people can eat inside the club or outside on picnic tables.”

Jefferson’s annual barbecue is the event of the season for more than just the club members.

Many out-of-towners mark their calendar each year for the Jefferson Barbecue in order to carry on what’s been a family tradition for them for years. Something tends to draw them back each year.

Peteet, still regarded as the chief sauce cook, has passed his recipe and technique on to the next generation, so it’s a time-tested delicacy by now. Peteet supervises while O’Neal Parker and Dave Compton mix and measure. Several like to stir the pot.

“We really look forward to this weekend,” Jefferson Fire Chief George Norris said. “It’s a lot of work leading up to it as we clean the pit, make repairs, gather supplies and ingredients, then spend a day and night cooking. We’re all exhausted by the end of the day of the barbecue, but we enjoy it and we know what a difference it makes for the club and the community.”

There are relatively concrete plans for each barbecue, and they go into motion about three months before the event. The bulk of the work is done in the two weeks prior, when the club grounds get a facelift, the pit is cleared and refilled with sand, the grates pressure washed and repaired from the previous cooking, and a couple truckloads of hickory slabs are carted in and stacked.

By this time, some of the best potato salad and cake recipes are being perfected in kitchens throughout the community, and those will arrive Saturdaymorning.

With all other supplies gathered already, the pork shoulders arrive on Friday morning around daylight, after a bright-eyed crew has started a hickory fire and finished greasing the pit. They unload a truck filled with cases of the precious cargo. Approximately 2,000 pounds of shoulders are placed like pieces of a jigsaw puzzle onto the pit.

The club’s barbecue pit is a unique one, built for this event. It’s a concrete pit with reinforced grates atop that allow for cooking over a glowing bed of hickory coals. The pit runs more than 20 feet long and about 6 feet wide.

The pit is “fired” and the meat covered, and so begins the cooking. The crew carefully watches the fire and the meat. Into the night, they turn the meat, throw a little magic on it, and babysit it until the sun rises. Then, shoulder by shoulder, they chop the meat, and Peteet’s signature sauce is added and stirred into tubs weighing approximately 200 pounds each.

One-by-one throughout the day, those tubs are carted inside where another busy crew makes plates and packs pounds, and yet another serves the buffet line.

It’s estimated that around 100 people volunteer to help host the event, and they agree that the work required to host the event is well worth the tradition and fellowship.

“We get to see people that we haven’t seen since this time last year, and we really enjoy working together as a community. And we like our barbecue, too!”

For more information on the Jefferson Barbecue, visit the Club online at www.facebook.com/jeffersoncommunityclub.