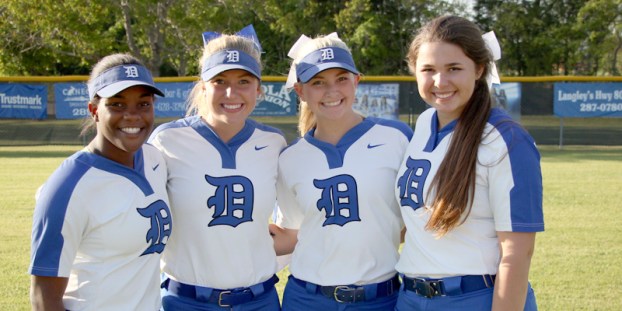 Senior members of the Demopolis High School softball team were honored Thursday during the intermission of a doubleheader against Dallas County and West Blocton. This season’s seniors are, from left, Napoleon Roberson, Kayla Montz, Kendall Hannah, and Natalie Tatum.

Each player was honored with their number and Tiger paw painted on the outfield grass. It was also a good night on the field for the seniors and their teammates as they won both games of the doubleheader, 18-0 over Dallas County and 2-1 over West Blocton. For more see Page 6.

Demopolis High School continued its winning ways on the diamond, scoring a 5-1 victory over Central-Tuscaloosa on Friday, March 23.... read more