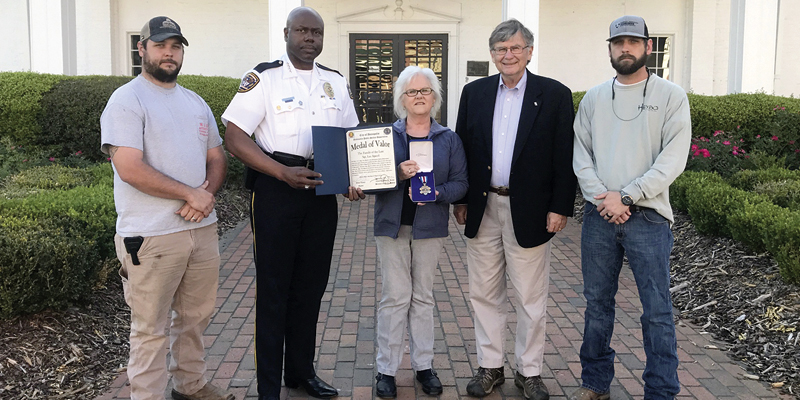 The family of the late Lee Speed, the only police officer in the history of Demopolis to be shot in the line of duty, was on hand to receive on his behalf a belated Medal of Valor. Speed was shot in 1973. PIctured above are, from left, Cody Hilchey, Speed’s grandson; DPD Chief Tommie Reese; Gayle Hilchey, daughter; Mayor John Laney; and Shane Hilchey, a grandson.

DPD Officer Lee Speed, shot in line of duty, remembered for his sacrifice

It has been almost 45 years since the Demopolis Police Department saw one of their own struck by a perpetrator’s bullet, and on Thursday the late Officer Lee Speed was posthumously recognized with the Medal of Valor.

During a Demopolis City Council meeting, Speed’s daughter, Gayle Hilchey, along with his three grandsons, C.J., Shayne and Cody Hilchey, accepted the award on the family’s behalf.

By all accounts, Speed is the only Demopolis police officer to have been shot in the line of duty. While he survived the shooting, friends say he never fully recovered.

Although many years have passed since the incident, Gayle said her father would be pleased in receiving the Medal of Valor.

“We are all very proud,” she said. “If dad were here he would really have liked it.”

Gayle was in her 20s when her father was shot on duty. “I couldn’t believe it had happened. But, if not for Mr. Bailey, my dad wouldn’t have been with us as long as he was.”

It was Officer Lewis Bailey, now a retired lieutenant, who fired the shot that wounded the suspect, Peter Harris, and ended the violence on that morning in July of 1973.

“I’ve tried my best to forget it, but it keeps coming back,” said Bailey who was among those in attendance Thursday.

According to Bailey, he was the first to respond to the scene that morning when Police Chief A.E. Cooper told him to go to the east side of town where there was a complaint of a man wearing a police uniform and carrying a gun.

“I went to the farthest part of Pettus Street and came around to the high side of Rainbow Circle, and that’s when I saw him,” Bailey recalled. “I could tell he was wearing a uniform, but at that point I didn’t see a gun.

“I approached him and said I needed to talk to him about a gun … he said I would have to go to his house to talk about that. That’s when I saw the gun and got nervous.”

Bailey said Harris began to walk away as he called for backup. Shortly after, Officer Speed and Officer Jimmy Glass arrived on the scene.

Speed approached Harris in an attempt to get the gun. Bailey said he stood back, but had a bad feeling.

“After a few minutes, I knew (Speed) wasn’t going to talk him out of that gun. I started maneuvering to a place that I could see (Harris) better,” Bailey said.

That, according to Bailey, was when Harris went for his gun.

“He went for his gun, and I went for mine … witnesses said the shots went off about the same time,” he said.

The bullet Harris fired from his .22 revolver hit Officer Speed in the arm, according to the July 31, 1973 edition of the Demopolis Times.

Bailey’s gunshot hit Harris in the leg, but he did not go down immediately. “For just an instant he was focused on me … it all happened really quick. By the time he got to me he had fallen down, and when he was on the ground I was able to get his gun.”

At that time, the DPD made ambulance runs and Bailey rushed to the station, told dispatch what happened and took the ambulance to the scene where they helped Officer Lee, as well as the shooter.

“Me and Jimmy (Glass) put that guy in the ambulance,” referring to Harris.

Harris suffered what the newspaper reported as a “severely broken leg” caused by the 357 Magnum bullet fired from Bailey’s sidearm.

“It was one of the miracles that morning …. we had been target shooting the day before. That 357 bullet was the only real bullet in my gun,” Bailey said.

The call to honor and remember the sacrifice of Officer Speed began in a casual conversation between a couple of officers who served with him. It was former police officer John Osborne who went to the police department asking that Speed be recognized. Osborne and Bailey started as Demopolis Police Officers on the same day in 1970.

“(Bailey) was getting ready to retire, and we were reminiscing. We started talking about whether anything was ever done for Officer Speed. I went through city council minutes from 1973 on and didn’t see a word about it. I looked through newspapers and didn’t see anything. That’s when I asked (Chief Tommie Reese) what could be done. Sgt. Speed suffered his whole life (from the gunshot). He was overlooked, and that is one of the sad parts of this situation. We might not can correct the wrong, but we could at least recognize him and let people know what happened,” Osborne said.

DPD Chief Tommie Reese said it was important for the city to honor Speed.

“I was eight years old when it happened, and I have some memory of it. We could have had an officer killed that day, and we’ve been fortunate to not have any incidences like that since. He is still the only police officer to be shot in the line of duty for the City of Demopolis. Honoring Officer Speed is important in bringing attention to the sacrifices and dangers involved with being a law enforcement officer and to help provide some sense of closure for his family. In light of what happened (Thursday) with two officers shot while eating lunch, it is important to remember what these men and women go through simply for wearing a uniform,” Reese said.

The police chief added plans are being made to recognize the actions of Officer Bailey at a council meeting on May 17.