The Demopolis City Schools Board of Education approved an application fee for out-of-district students and recognized a teacher for heroism during a meeting Monday, April 16.

Second grade teacher Dee Roark was presented with a certificate of heroism for helping a student who was choking during lunch. 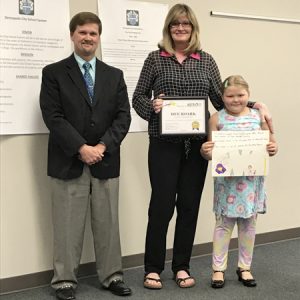 Superintendent Kyle Kallhoff with second grade teacher Dee Roark and her student, Emma Blankenship. Roark was presented a heroism award for her quick actions in performing the Heimlich maneuver when Blankenship began to choke during lunch.

The student was choking on a chip and was fighting for breath when Roark sprang into action, performing the Heimlich maneuver.

The student, Emma Blankenship, wrote a letter to Superintendent Kyle Kallhoff asking that Roark be recognized as the Teacher of the Month for “saving her life.”

“When I first got the letter, I thought it was very sweet. But, the more I found out about it, the more I realized it really was a serious situation and that Mrs. Roark should certainly be recognized for her quick action,” Kallhoff said.

During the business portion of the meeting, the board approved implementation of a $50 application for all non-resident students. The fee will not be charged to current out-of-district students, nor Pre-K students, and will only be paid one time per student.

The board also approved an evaluation assessment on the superintendent. After an evaluation by members of the board on Kallhoff’s performance, he received an overall score of 4.16 out of a possible high score of five. The guidelines for the evaluation were provided by the Alabama Deparment of Education, according to BOE Chairman Conrad Murdock. A score of 4 means the superintendent “exceeds expectations,” Murdock said.

During his report to the board, Kallhoff said he felt certain the system would be receiving an additional teacher unit for its Pre-K program.

He also reported that as the meeting, there have been 143 students registered for kindergarten, which is higher than the past three years, and is likely to increase.

Interviews for a new principal at U.S. Jones Elementary are ongoing as current the current principal, Leon Clark, is set to retire at the end of the school year.

“We will have a called meeting on May 3 with the hopes of having a recommendation,” Kallhoff said.

The superintendent said schools are looking into buzz-entry systems at each school as an added safety measure, reporting that some federal funding would be available for such a purchase. He said the cost would be about $63,000.  He also said federal sources could help fund student identification cards, which would cost approximately $13,000.