Mullen traveled to George Washington’s Mount Vernon and, along with other delegates, laid a wreath at the tomb of the Washingtons. He also visited the Newseum, U. S. Department of State, Library of Congress, Senate Chamber, Russel Senate Office Building, Supreme Court Building and several memorials during the week.

Demopolis High School senior Tristan Mullen is pictured with the U.S. Capitol in the background during his recent trip to the U.S. Senate Youth Program. Throughout the week, Mullen participated in a variety of leadership activities and met many of the nation’s leading political figures.

“I was just amazed, especially with me being a history buff and a law buff … That I’m sitting in the courtroom where Roe v. Wade was handed down and where Brown v. Board [of Education] was handed down – that was mind blowing to me,” he said about the Supreme Court Building.

Each day, the delegates ate lunch and listened to a speech from different political figures such as Justice Neil Gorsuch, Senator Tim Scott and Congressman John Lewis. Because Lewis was born in Alabama and represents Georgia, delegates from those states, including Mullen, were seated with him at the meal.

“I had heard about him my whole life and the contributions that he and [Martin Luther King Jr.] and Ralph Abernathy made and to be sitting here eating with him, it was like – oh my God, it was surreal,” he said. 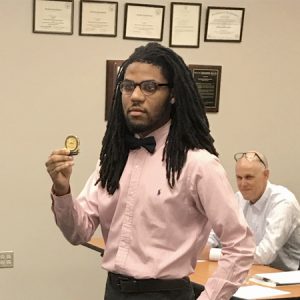 Mullen shows an official Presidential Medallion, given to him personally by President Donald Trump, during his report to the Demopolis Board of Education. He also spoke at a Demopolis City Council meeting as part of the requirements of the program.

Mullen said that he felt that being the president’s guest was the most “mind-blowing” moment of this trip.

“No matter who is in the office, it’s surreal to be in the eastern wing of the white house [and] the president of the United States is hosting you. You’re his guest at a reception.”

Mullen also said that the experience reassured him that he was on the right path.

Mullen and other delegates created the Black Delegation, which is fully supported by the USSYP.

“The whole week we were talking about black issues in different regions of the country,” he said.

The Black Delegation is currently growing their platform and working towards hosting forums in schools via Skype.

“I want to thank Coach Wasson because his teaching really inspired me. I had already been interested in history, but he really lit the spark even more,” he said.

Mullen was one of 104 students chosen throughout the nation and will receive a $10,000 scholarship to the university of his choice. Mullen will be attending Sanford University in the fall and majoring in political science and history.

(This article originally appeared in the Wednesday, April 25 issue of the Demopolis Times.)