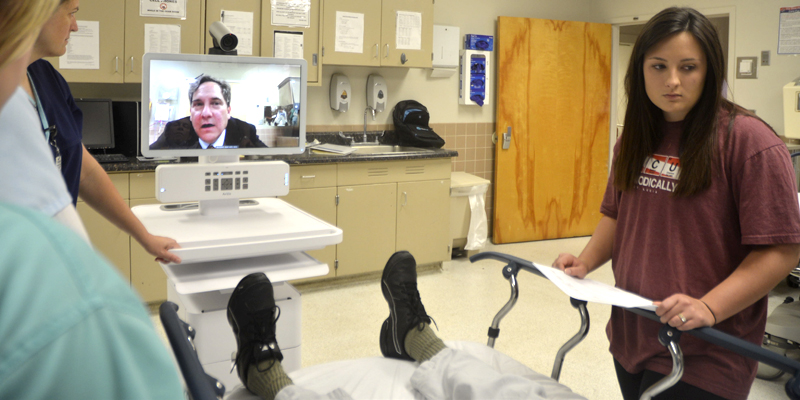 Bryan W. Whitfield Memorial Hospital debuted its Stroke Alert Program on Tuesday, making it a Level 3 Stroke Center. The program is in conjunction University of Alabama at Birmingham’s eMedicine program which provides telemedicine services to its affiliated rural hospitals via internet connection and video calls.

The telemedicine program at BWWMH will be specifically for stroke patients admitted to the Emergency Room.

“Whereas in the past we would have to call a facility to try to locate a neurologist and then it’s just a verbal callback exchange between the neurologist and our local physician … That actual consult doesn’t really take place until they’re transferred to another facility, so you’ve delayed the diagnosis treatment of that patient by at least two or three hours” said Dereck Morrison, assistant administrator and director of the Stroke Alert Program.

Morrison said that the goal was to diagnosis the patient and administer medicine within one hour of the last known “well-time” of the patient. The less time it takes for a patient to be administered a blood clot buster, then the less likely they are to experience lasting effects after the stroke

Data from the Stroke Alert Program will be sent to UAB’s eMedicine team and examined every three months. The two programs will work together to constantly improve BWWMH’s telemedicine program.

Morrison and his team at BWWMH have been working closely with UAB’s eMedicine team, including Medial Director Eric Wallace, and since October 2017. They hope to expand the program in the future by offering more services by telecommunication and eventually creating a telemedicine hub within the hospital.

“This is just the start, because once you realize that you can do this type of care remotely it opens up the possibilities for critical care and in outpatient medicine like other subspecialty services that Demopolis may not have,” Wallace said.

This means that hospitals would be able to offer services that they normally could not.

“For me, the beauty of telemedicine is we can go to communities and basically say ‘What type of care do you need?’ and then we can connect the dots.”

Training was conducted by VeeMed, a virtual healthcare company.

(This article originally appeared in the Saturday, April 28 issue of the Demopolis Times.)