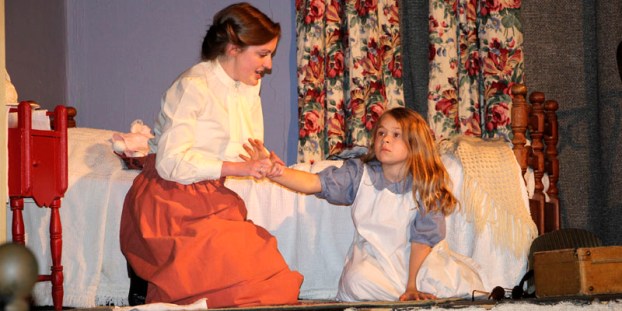 Annie Sullivan attempts to teach Helen Keller to sign the word “doll” during their first interaction together in the drama, “The Miracle Worker,” which will presented by the Canebrake Players this weekend. Sullivan is played Mary Kate McPherson, left, and Keller by Eva Mason.

The Canebrake Players will present “The Miracle Worker”, a play based on Helen Keller’s autobiography, on Friday, May 4 through Monday, May 7 at 7 p.m. The performance on Sunday, May 6 will be a 2 p.m. matinee.

The play itself takes place during a two-week period during Helen Keller’s early life, when she first meets her teacher and lifelong companion Annie Sullivan. It tells the story of how Sullivan began teaching Keller how to communicate and includes Keller’s initial breakthrough. 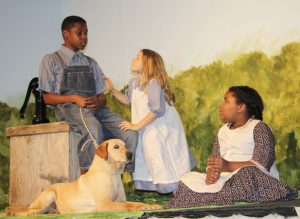 In an early scene, Keller’s problems interacting with others is highlighted. Actors pictured are, from left, Trenton Gracie, Eva Mason, and Kylei Elmore.

“It was in that amount of time that the miracle happened that Annie Sullivan was able to help Helen,” said Susanna Naisbett, director of the play.

Naisbett took up the role as director because she loves dramas, and she also thinks that a play featuring an inspirational Alabama-native was fitting since the state is celebrating its bicentennial.

However, “The Miracle Worker” did not come without its challenges.

“It’s had a lot of ups and a whole lot of downs,” Naisbett said.

According to Naisbett, the number of sets needed and small size of the stage has been an issue during preparations and set design, plus the show itself is physically demanding.

She also said that following the script exactly as it is written has proven difficult as the playwright William Gibson provided so many directions in the script that the actual lines can get lost on the page. The lines themselves even come with challenge.

“The language also has a different rhythm than what we speak today,” Naisbett said. 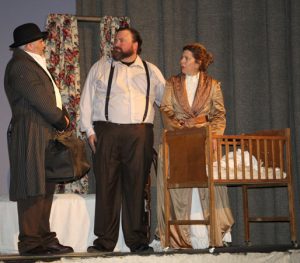 From left, Dylan Daniels, Donna Bishop, and Jody Glosson in the opening scene.

Despite the challenges, the Canebrake Players have worked hard to make sure the show lives up to the true story.

“This cast really makes it come alive and makes you feel all these emotions,” she said.

Naisbett invites everyone to come and enjoy the play.

“We have such a great support in the community for all of our other genres. It’s a story people know. It’s a very endearing story. And while it’s a drama and those aren’t so popular around here, I really hope people come out and see it.”

Tickets are $12 for adults and $8 for students.