Demopolis High School saw both the girls’ and boys’ soccer teams exit the 5A state playoffs in the first round on Friday when Calera outpaced the Tigers in each game. 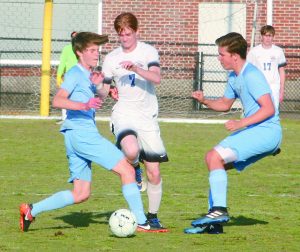 Demopolis junior Tyler Pipkins maneuvers between Calera defenders. The DHS boys’ soccer team saw its season come to an end Friday with a 5-0 loss to Calera in the first round of the 5A state playoffs. The girls’ team also lost in the first round, falling to Calera 7-2.

The boys’ season ended with a 5-0 loss while the girls’ team dropped its game by a score of 7-2.

After falling behind 2-0 at the half, the Demopolis girls were able to net a couple of goals in the second half by Julia Singleton and Aniya Johnson.

The DHS soccer teams each finish with an overall record of 7-3.