Brewer named next CEO at BWWMH 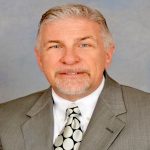 Brewer, a native of Choctaw, Oklahoma has more than 25 years executive experience in various hospitals and healthcare operations. In addition to his role at Citizens Baptist Medical Center, he has worked in the Southeast with Brookwood Medical Center and Atlanta Medical Center over the last five years.

“I am excited to be joining Bryan Whitfield Hospital” Brewer said. “I am from a small town in Oklahoma and the experiences of working in health care in a smaller community such as Talladega have been very rewarding. We are looking forward to becoming part of the Demopolis community.”

Current CEO Arthur Evans will be retiring after a 39 year career with the hospital in which he has held several management positions and has been CEO since 2014. He was instrumental in starting the relationship with UAB and building the partnership between the two healthcare providers.

“We are excited that Doug will be joining us and carrying on the important work spearheaded by Arthur over the years,” said Hospital Board Chairman Rob Fleming. “This hospital, and this community, owe Arthur a huge debt of gratitude. Arthur has dedicated his professional life to Bryan Whitfield Hospital and we are happy for him as he moves on to the next phase of his life.”

(This article originally appeared in the Wednesday, May 9 issue of the Demopolis Times.)