Demopolis High School junior Parker Hallmark will be has been named to 2018 Boys State and is being assisted with the trip by American Legion Post 41. 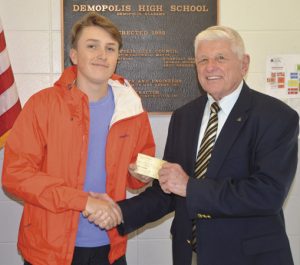 American Legion Post 41 Commander Tom Boggs presents a sponsorship check to Parker Hallmark who will be representing Demopolis as this summer’s Boys State in Tuscaloosa.

Hallmark was chosen for the honor by a committee at the high school to represent Demopolis at the gathering of representatives from across the state during the week-long annual American Legion Boys State to be held in Tuscaloosa in June.

Hallmark is the son of Mr. and Mrs. Luke Hallmark.

Attendance at Boys State is one of the premier honors to be bestowed on any student and provides an opportunity for the boys to learn about and practice good citizenship, operation of government, and always develops lifelong friendships.

The American Legion, the oldest veteran’s group in the nation, has, since it’s organization following World War I, been very involved in furthering the education of young people, especially in the areas of citizenship, government, sports and leadership.

Post 41 in Demopolis has participated in this endeavor every year for many years, according to Boggs.