Booen recognized as hospital’s Auxiliary Member of the Year

Sandra Booen, a self-described people person, decided to join a volunteer organization in June 2016 to get out of the house and meet new people. She chose to join the Bryan W. Whitfield Memorial Hospital Auxiliary specifically because of the importance that the hospital has to her community.

“I just was trying to volunteer to see if there was some way I could serve or help keep it going. By yourself you can’t do much, but as a group you can accomplish a good many things,” she said. 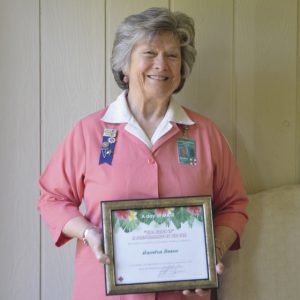 Sandra Booen began volunteering as a member of the Bryan W. Whitfield Memorial Hospital Auxiliary in 2016. Recently she was named the “Auxiliary Member of the Year” by the Auxiliary organization.

Now Booen is being honored as the Auxiliary Member of the Year for her dedication and service, not only to the Auxiliary, but also to the entire community.

Stephanie Hoggle, who works closely with the Auxiliary at the hospital, said that Booen was chosen by her fellow members — and for good reason.

“She goes above and beyond her duties. She visits members when they are sick. She sews needed items for others without them asking just because she knew there was a need. Sandra is kind and warm. [She’s] a joy to be around and always willing to fill in and lend a helping hand. We just love her,” Hoggle said.

Booen works in the gift shop but has filled in multiple positions throughout the organization. She is mostly in charge with gift wrapping, inventory and the register. She also helps to change out the flowers and Christmas decorations in the hospital’s lobby.

But Booen is not the type of member to clock-in and clock-out. She is also involved in several fundraisers, including taking the reins on the spring’s Bridges and Bows fundraiser. She fills responsibilities such as signing up volunteers, getting the word out, setting up and packing up. Booen has stayed an involved member of the Auxiliary for the past two years because she’s made so many friends – 25 to be exact – and loves volunteering.

“It’s just been a joy to make friends and get to know them and be a part of something you feel like is helping out the community,” she said.

Booen was named Member of the Year at the organization’s annual luncheon on April 17 and is very humbled to be named. “I’m just thankful for whoever was responsible for bestowing this honor upon me.”

(This article originally appeared in the Wednesday, May 9 issue of the Demopolis Times.)