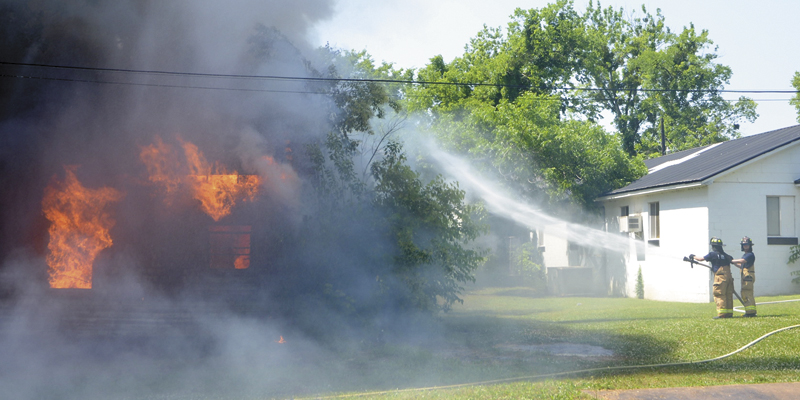 Demopolis firefighters work to contain a controlled fire as a dilapidated building is burned to clear the property and to provide training for the department.

Demopolis firefighters underwent valuable training on May 7-9 at a dilapidated property on North Cherry Avenue. Each of the department’s three shifts took a day to perform scenarios such as search and rescue operations, window breaking, fire streaming, fire attacks and mayday drills.

On Thursday, the Demopolis Fire and Rescue Department set fire to the structure, allowing firefighters to experience a live fire in a controlled environment while clearing the property of a building scheduled for demolition.

The firefighters were in teams of two during the drills. Simulated fire and artificial smoke was used to make the drills as real as possible, and one of the search and rescue operations involved them saving one of their own. 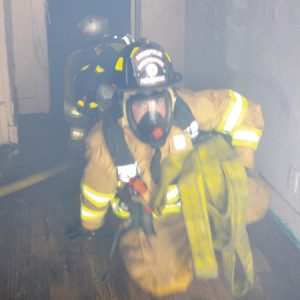 Firefighters complete a search and rescue drill carrying a “victim” to safety from a simulated house fire. Smoke machines were utilized to make the training as realistic as possible. The property used for the training was deemed by the City of Demopolis Building Department to be dilapidated and scheduled for demolition.

“That was a team building exercise that allowed each firefighter to realized that each of them could actually going in and rescue them,” said Captain Alex Morris, who was in charge of training.

Morris said that the younger members of the fire department gained new experience from this training and the older members were given a refresher for their skills.

“All of the firefighters responded well. They loved the drills.”

Plans to use more dilapidated properties are underway, but a building must meet a certain set of criteria, such as a set distance from other properties and accessibility to fire hydrants, before it is accepted for training.

Director of Public Safety Tommie Reese said that the training program benefited all of Demopolis because firefighters were able to hone their skills while beautifying the city by removing a dilapidated building.

“It’s an eyesore to the community, and people have been complaining about it in the neighborhood about the house being there. We decided to use this house as training to help our firefighters get exposure to fighting a fire. The fire department is a very young department now, and this training is invaluable to them.”

This program is a combined effort of Reese, the Public Works Department, Building Official Julius Rembert, the city council and the mayor.

(This article originally appeared in the Saturday, May 12 issue of the Demopolis Times.)