Demopolis student musicians got a special treat at the Spring Concert on May 1. Composer Tyler Arcari came down and rehearsed with the students and conducted his own pieces during the concert.

Director of Bands Demetrius Scott said that this is a rare occurrence in the marching band world.

“Most of the composers are either deceased or up in age and don’t live near the school,” he said. 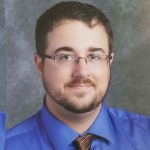 Arcari, however, is the band director for Russel County High School on top of composing since the ninth grade. His music was recently played at the All-State Band Festival, and several pieces have had world premieres at Troy University.

“I was fortunate to be able to rehearse [with] the Demopolis Middle School band and High School band during the day as well as [conduct my pieces at] their concert,” Arcari said.

Scott said it was beneficial to the students because they were able to ask Arcari questions about his music and get detailed responses.

“Me and [Assistant Band Director Adam] Brown may teach it differently than how he may want it,” Scott said.

Scott and Brown discussed having a guest composer during planning for the Spring Concert. Since Arcari is just a few hours away and has been gaining notoriety in the music world, he was the perfect candidate.

Scott said that it broadened the students’ horizons since everyone conducts music pieces differently.

“It gave them another view on other people’s take on music.”

According to Scott, the students had a great time with Arcari, even getting him to sign their music sheets with his compositions on them.

“They had a very good experience. He was extremely gracious and extremely nice to all the kids.”

Arcari’s music was performed by the community band, high school band, the seventh and eighth-grade band and the sixth-grade band.

Arcari said that the students have bright futures ahead of them.

Scott said that the experience was worth repeating, and he will look into inviting other guest composers.

“It may can become a tradition.”

(This article originally appeared in the Saturday, May 12 issue of the Demopolis Times.)