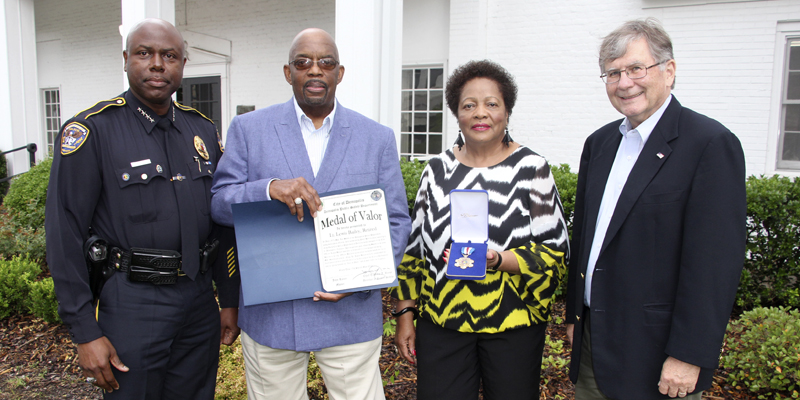 After posthumously recognizing Demopolis Police Officer Lee Speed with the Medal of Valor related to a shooting incident in 1974 that left him wounded, on Thursday the Demopolis Police Department recognized Lewis Baily with the same award for his actions that put an end to that incident.

It was Bailey who, upon Speed being shoot by Peter Harris, returned fire and wounded the suspect.

“I believe it to be appropriate that during this week, Police Officer Memorial Week,” we recognize an officer who actually saved another officer’s life in 1974,” said DPD Chief Tommie Reese in presenting the award.

“I would like to thank everyone who had something to do with this,” Bailey said during the ceremony. “I especially want to thank John Osborne; he stayed with this and made sure it is not forgotten.”

Osborne, a former police officer himself, had spoke with city officials  about the incident. Osborne and Bailey started as Demopolis Police Officers on the same day in 1970.

According to Bailey, the events of that day in 1974 began when he responded to the east side of Demopolis as requested by then-Police Chief A.E. Cooper. The department had received a complaint of a man wearing a police uniform and carrying a gun.

“I went to the farthest part of Pettus Street and came around to the high side of Rainbow Circle, and that’s when I saw him,” Bailey recalled. “I could tell he was wearing a uniform, but at that point I didn’t see a gun.

“I approached him and said I needed to talk to him about a gun … he said I would have to go to his house to talk about that. That’s when I saw the gun and got nervous.”

Bailey said Harris began to walk away as he called for backup. Shortly after, Officer Speed and Officer Jimmy Glass arrived on the scene.

Speed approached Harris in an attempt to get the gun. Bailey said he stood back, but had a bad feeling.

“After a few minutes, I knew (Speed) wasn’t going to talk him out of that gun. I started maneuvering to a place that I could see (Harris) better,” Bailey said.

That, according to Bailey, was when Harris went for his gun.

“He went for his gun, and I went for mine … witnesses said the shots went off about the same time,” he said.

The bullet Harris fired from his .22 revolver hit Officer Speed in the arm, according to the July 31, 1973 edition of the Demopolis Times, but Bailey said as he recalls he was actually hit in the hand.

Meanwhile, Bailey, who was standing behind and to the right of Officer Speed had a tight target to hit Harris.

“They were standing very close together, face to face. I saw (Speed) wave his hand — I don’t know if he was trying to get the gun or just reacting in defense — at my angle I had a very small window to shoot. I didnt know (Speed) had been hit until he said ‘hurry up’ and I saw him holding his hand.”

Bailey’s shot hit Harris in the leg, but he did not go down immediately. “For just an instant he was focused on me … it all happened really quick. He fell down and when he was on the ground I was able to get his gun.”

At that time, the DPD made ambulance runs and Bailey rushed to the station, told dispatch what happened and took the ambulance to the scene where they helped Officer Speed, as well as Harris, who  suffered what the newspaper reported as a “severely broken leg” caused by the 357 Magnum bullet fired from Bailey’s sidearm.

After that event, Bailey remained with the DPD for several months before accepting a job with Gulf States in Tuscaloosa; however, he would return to the department about a year later at the request of then-Police Chief A.E. Cooper.

Bailey joined the Demopolis Police Department in 1970, about two weeks after completing six years in the U.S. Army.

Bailey would go on to have a 29-year career with the department, retiring as a lieutenant in 1999. After that, he would work 14 more years as a deputy with the Marengo County Sheriff’s Office. Upon leaving the sheriff’s office he and his wife, Eleanor, moved to his original hometown of Tuscaloosa.

(This article originally appeared in the Saturday, May 19 issue of the Demopolis Times.)