Valedictorian Shaelin Allise Jones and Salutatorian Sarah Duncan Culpepper led Demopolis High School’s Class of 2018 at the graduation ceremony on Friday. They were recognized during Senior Awards Day on May 10.

Jones will be attending the University of Alabama as a business major. While Jones isn’t set on what she wants her career to be, she definitely has some ideas.

“I’ve always dreamed of owning my own business, and I felt that this major would not limit me in whatever path I might end up choosing in the long run.” 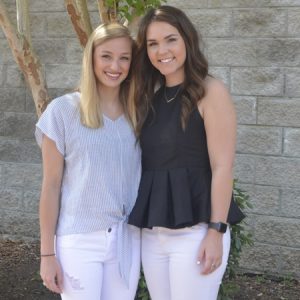 Demopolis High School’s Class of 2018 Salutatorian Sarah Duncan Culpepper, left, and Valedictorian Shaelin Allise Jones. They led this year’s graduating class during a graduation ceremony on May 25 at DHS. Culpepper and Jones were recognized during Senior Awards Day on May 10.

Jones also said that she may even continue on to law school to become a corporate lawyer.

For now, she will just focus on earning her degree.

“In today’s society, students take this opportunity for granted and fail realize just how fortunate they truly are to be able to learn.”

Jones also said that students shouldn’t be so caught up in being perfect that they forget to actually enjoy their youth, because high school will be over before they know it.

“At least, it was for me because I still can’t believe I’ve finished my last days at Demopolis High School.”

Jones is the daughter of Shone and Lisa Jones and Sheri Jones.

Culpepper will also be attending the University of Alabama. She will major in nursing. Culpepper said that once she graduates with her bachelor’s degree, she will go back to school to become a nurse practitioner.

“Helping people is something that I’m passionate about, and nursing is all about helping people.”

Culpepper’s advice to future graduates is to be themselves. She said that having friends “who love you for you” eases the burden of high school.

She also said that students should work hard but also enjoy their time in high school.

“Try hard in school from freshman year to senior year and be sure to have as much fun as possible because after those four short years you’ll miss all of the wonderful people you’ve grown up with. Listen to your teachers, never miss a football game and don’t rush it.”

Culpepper is the daughter of Gayla and Tom Culpepper.

Photos from Senior Awards Day will be published in an upcoming edition of the Demopolis Times.

(This article originally appeared in the Wednesday, May 23 issue of the Demopolis Times.)