Soronen set to retire after 25 years in law enforcement

Demopolis Police Lt. Tim Soronen, who has served Demopolis since 1997, has announced he will retire in June.

Soronen began his career in Demopolis, first as a Narcotics Agent until 1999 and then as Detective Sergeant and the supervisor of the Criminal Investigations Division. He became the Field Services Division Commander in 2013 upon his promotion to Lieutenant and has remained there ever since.

Soronen has been involved in law enforcement since 1993, when he worked in York, but has served the public since 1982 as a member of the U.S. Navy until 1992. He went to the police academy at the University of Alabama as part of his move to police work.

Soronen, who had wanted to be a police officer since he was 10, entered the field for the same reason that he served in the Navy. His goal was to help people.

“Being able to help people and to get a successful conclusion of a case — to me — is very satisfying,” he said.

During his time with criminal investigations, Soronen said he was involved in thousands of successful prosecutions in Marengo County, and each one had a special meaning to him.

“Anytime that we had a case that was completed and we had a successful prosecution was — to me — a great accomplishment.”

Soronen also started the cybercrimes unit in 2006, which has led to the Demopolis Police Department prosecuting approximately 50 sex offenders since then.

While Demopolis’ homicide rate is low, Soronen has had his share of murder cases by assisting other agencies. Soronen and the rest of the DPD helped an agency in Georgia arrest and prosecute a murderer who had made his way to the Demopolis area. 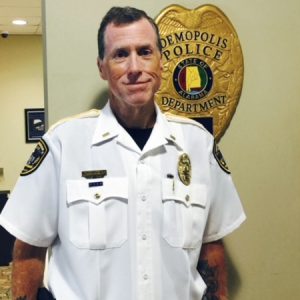 Lt. Tim Soronen will retire after 25 years in law enforcement.

“It was a fairly large case,” Soronen said. “I spent two weeks in Georgia testifying about how we caught him.”

He has also been involved in several hundred drug trafficking arrests and prosecutions in the area.

Soronen has given every case — small and large — the same amount of care and attention, because even the smallest of cases still matter to somebody.

“In the scope of things, people may not feel like that’s a big case, but to them it is,” he said.

Though Soronen has a hard time narrowing down his favorite moments of his career, his wife pinning his bars on him during his promotion to Lieutenant immediately jumped out to him.

“I really cherished having her as part of the ceremony, so that she knows that it’s not just me, it’s her too, that’s doing all this.”

As Soronen has never been one to stop working, he will spend his retirement as Compliance and Special Projects Manager at Collins Communications.

Soronen thanks God, his family, his coworkers, Chief Reese and his past chiefs, the City of Demopolis and the citizens for making his career so fulfilling.

(This article originally appeared in the Wednesday, May 30 issue of the Demopolis Times.)