Breanna Braxton will represent Demopolis High School at 2018 American Legion Auxiliary Girls State at The University of Alabama in June.

The high school junior was nominated by a committee of teachers from DHS. 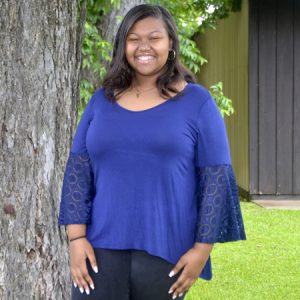 “One day I was just in class and [Principal Blaine Hathcock] called me into the office, and he was like ‘You were nominated by the school to be the delegate.’ I was excited,” Braxton said.

Braxton first became interested in Girls State when she was a freshman. She knew other students who had attended the highly respected and selective program, and they shared their experiences with her.

When Braxton found out that she was going to get that same experience, she was “honored.”

“That’s a big deal because they only pick one girl out of the whole junior class. And there’s about 180 of us, so I felt really honored. I was humbled by that.”

Girls State is a weeklong program designed to teach young women about the democratic process and how government functions on the state and national level. Participants form “cities”, campaign in one of the two mock political parties for seats such as mayor and elect “officials” of their Girls State.

Braxton said that she plans to run for mayor, probate judge or even governor. Participants have a $50 limit to spend on their campaigns, and some may only have a few hours to earn votes. If Braxton runs for mayor or probate judge, she could face the same time restrictions.

“I’ll probably need to have my stuff ready when I get up there,” she said. Braxton plans on using posters during her campaign.

On the last day of Girls State, delegates will travel to Montgomery to meet Gov. Kay Ivey.

Braxton is Student Council President and a member of Future Business Leaders of America (FBLA), the Tiger Arts Guild, the Beta Club and Mu Alpha Theta. She has been in the Demopolis City School System all of her life and is the daughter of Gregory and Patricia Braxton.

Her participation in Girls State is sponsored by the Kiwanis Club of Demopolis.

(This article originally appeared in the Saturday, May 26 issue of the Demopolis Times.)