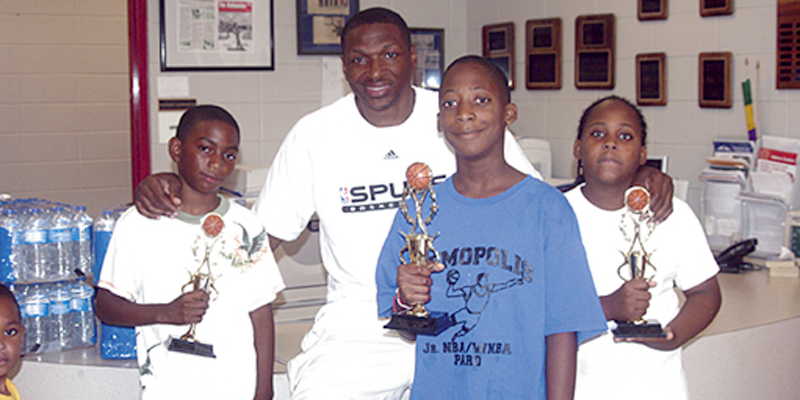 Retired NBA star and Demopolis native Theo Ratliff will once again return to his hometown to teach students during his annual youth basketball camp at the Theo Ratliff Center next week.

Former NBA star and Demopolis native Theo Ratliff will return to his hometown to coach kids in the Theo Ratliff Activity Center’s annual youth basketball camp on June 11-12 from 9 a.m. to 1 p.m.

Director of the Ratliff Center Edward Ward said that the camp is for anyone aged 7-16 years old and participants will be split up by age group between three different gyms in the city to learn “the fundamentals of basketball [and] good sportsmanship.”

Ratliff will rotate between each group to spend time and work with the kids. Ward also said that Ratliff brings other coaches with him to the camp.

“It’s just a part of Theo giving back to the community,” he said.

During the opening assembly, Ratliff will share a message to kick-off the camp.

“He always has a message for the kids as far as working hard and trying to excel academically,” Ward said.

Ward said there are 10 volunteers per gym to keep the basketball camp running smoothly because of the large number of kids participating in the camp. Past years have seen 300 students take part in the camp, but Ward suspects that this year will be larger since other counties have shown interest in being involved, as well.

“It’s something [the kids] look forward to every year.”

The basketball camp is free of charge and includes lunch. Participants can register on June 11 from 7:30-9 a.m. Ward invites parents to attend the opening assembly on June 11 at 9 a.m. at the Ratliff Center.

(This article originally appeared in the Wednesday, June 6 issue of the Demopolis Times.)