Marengo County unemployment rises slightly to 4.9 percent in May

The Marengo County seasonally adjusted unemployment rate increased .5 percent from April to May, based on data released by the Alabama Department of Labor this week.

Statewide, Alabama Department of Labor Secretary Fitzgerald Washington announced that wage and salary employment measured 2,042,400 in June, a 10-year high. The last time it measured at or above this level was in December 2007, when it measured 2,045,800. 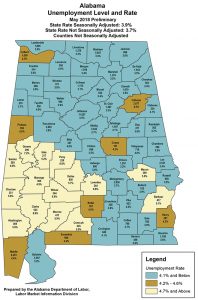 “Wage and salary employment in Alabama continues to increase significantly month after month,” said Washington. “This month’s count is the second largest we’ve ever recorded, yielding only to pre-recessionary numbers. It represents the most jobs our economy has supported in more than a decade. Employers are hiring in Alabama, jobs are available in Alabama, and people are working in Alabama.”

Marengo County’s unemployment rate represents a civilian workforce of 7,546 in May, which is up slightly from April’s 7,527. Those counted as unemployed rose from 332 to 366 in that time frame.

The unemployment rate for May 2018 mirrored that in the same month in 2017 when it was also 4.9 percent.

In neighboring Greene County, the rate increased by 4 percent, from 6.8 percent in April to 7.2 in May.

Sumter County saw a .6 percent increase from 5.4 in April to 6 percent in May.

Hale County’s unemployment rate increased from 4.3 percent in April to 5.2 in May.

Statewide, the unemployment rate increased slightly from 3.8 percent in April to 3.9 in May. The 3.9 percent in May is still a decrease from a year ago when May 2017’s rate was at 4.6 percent.

Over the year, wage and salary employment increased 21,600, with gains in the manufacturing sector (+4,600), the leisure and hospitality sector (+4,400), and the professional and business services sector (+4,000), among others.

Wage and salary employment increased in May by 7,000. Monthly gains were seen in the leisure and hospitality sector (+2,300), the manufacturing sector (+1,800), and the education and health services sector (+1,300), among others.

(This article originally appeared in the Saturday, June 16 issue of the Demopolis Times.)