Organizers of the Sixth Annual Hwy. 80 Songwriter’s Festival have announced this year’s entertainment lineup for the event to be held Saturday, July 7, from 6 to 9 p.m., on the downtown square in Demopolis.

Nine performers will take the stage for this year’s Songwriter’s Festival. The performances will be broken into three sets with three songwriters featured in each. This year’s songwriters include some familiar names to the festival. Among those set to perform are: Taylor Hunnicut, Ted McVay, Paul Garner, Brandon Paulk, Mike Rogers, Frank Field, Kenny Smitherman, Taylor Craven, and Megan McMillan. 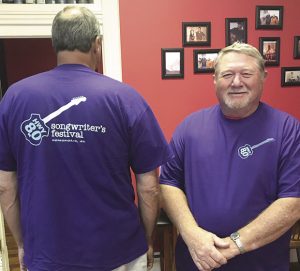 Many of this year’s performers have ties to Demopolis: Hunnicut is from Demopolis; McVay is a native of Demopolis and now resides in Auburn: Garner is also from Demopolis and now lives in Selma; Rogers, who will be joined on stage by his daughter Andi Turberville, is a resident of Demopolis; and Frank Fields, who resides in Stephenson, Alabama has ties to the local area. Smitherman, a resident of Tuscaloosa, is known locally as a member of the Chevy Six Band. Craven is a resident of Ocean Springs, Mississippi and Megan McMillan is from Tuscaloosa, originally from Centerville, Alabama.

According to Mike Grayson, who has been involved with the festival since its inception in 2013, the festival is designed to highlight talented songwrit

er’s while providing a night of entertainment in downtown Demopolis. He said one goal with each year’s festival is to highlight local talent while also keeping fresh faces in the lineup.

“We want to keep a balance of rotating new songwriters while bringing others back. We also try to keep it as local as possible,” Grayson said.

The event kicked off in 2013 after Grayson and Rachel Putman of Montgomery, met and discovered a shared love of music.

“I attended a West Alabama/East Mississippi mayor’s networking event and one of the assistants there was (Putman). In speaking with her we discovered a mutual interest in music. We spoke about how when people think of music in Alabama and Mississippi thoughts go straight to Muscle Shoals in Alabama and the Delta in Mississippi. We thought the Hwy. 80 Songwriter’s Festival would showcase the talent that exists in other areas,” Grayson said.

Originally, there were two Hwy. 80 Songwriter’s Festivals — one in Demopolis and the other in Meridian. While Meridian’s festival, originally scheduled in the fall, had trouble competing with other activities of the season, Demopolis has made it an annual summertime tradition, making some changes along the way.

“We had 22 songwriters and the performances stretched to over four hours. We realized right away that was too many, so we consolidated to three sets with three songwriters per set,” Grayson said.

Grayson adds that, while sometimes unknown to the general public, the performers bring a high level of professionalism to the stage.

“The artists have often commented on how much they enjoy playing here and the unique venue we have in the park. The reception given by the public has been very good and the artists appreciate that, too,” he said.

In the past, the event has been tied directly with the annual Freedom on the River event on the Fourth of July. But, Grayson said moving forward it will be held the first Saturday of July.

While last year’s event was effected by rain resulting in an attendance decrease, two years ago an estimated 700 people attended the free event. This year, in the case of rain, the event will move to the Demopolis Civic Center.

The downtown square is deemed an entertainment district for the duration of the event meaning alcoholic beverages will be allowed, but Grayson said it is intended to be a family-friendly event.

There will be food vendors and t-shirts will be sold.

(This article originally appeared in the Wednesday, June 20 issue of the Demopolis Times.)